Did Russia Poison Negotiators to Sabotage Peace Talks With Ukraine? 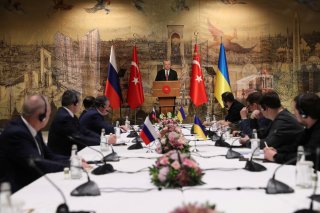 Several Ukrainian peace negotiators, including Russian billionaire oligarch and Chelsea FC owner Roman Abramovich, allegedly experienced an attempted poisoning ahead of peace talks in early March, according to the Wall Street Journal. The Wall Street Journal’s report alleged that the poisoning had been carried out by hardline elements of the Russian government in an attempt to prevent negotiations, although it did not disclose any evidence supporting this position.

The poisoning was allegedly carried out at the site of negotiations along the border between Ukraine and Belarus, where Russian and Ukrainian diplomats met in a series of unsuccessful discussions aimed at ending the war. In addition to Abramovich, two other negotiators—reportedly an unnamed Russian entrepreneur and the Ukrainian member of parliament Rustem Umerov—were said to be affected by the poisoning. The three men reportedly experienced eyesores and peeling skin, although all have since recovered.

The Ukrainian government downplayed the report, with an official in the office of Ukrainian president Volodymyr Zelensky describing the allegations as “false.” An unnamed U.S. official also disputed its conclusions, claiming that the three men had fallen sick due to “environmental” factors rather than an intentional poisoning.

However, the Dutch investigative journalism group Bellingcat offered support for the allegations, releasing a statement on Twitter claiming that “three members of the delegation attending the peace talks between Ukraine and Russia on the night of 3 to 4 March 2022 experienced symptoms consistent with poisoning with chemical weapons.” It noted that the symptoms were most consistent with “variants of porphyrin, organophosphates, or bicyclic substances,” adding that microwave irradiation might have also been a cause, although it noted that this possibility was “less likely.”

The group’s statement also raised questions about how Abramovich and the other diplomats had ingested the poison. It claimed that the men had not had any drinks or food at the meeting except chocolate and water, and a fourth member of the negotiating group who had consumed the same items from the same source had not fallen ill.

Abramovich was one of the most visible Russian oligarchs in the Western world prior to Russia’s invasion of Ukraine on February 24. Although he served as a mediator in the early days of the conflict, flying from Moscow to Kyiv and meeting with Zelensky, he was sanctioned by the United Kingdom and the European Union in early March over alleged business ties to Russian leader Vladimir Putin. Abramovich has denied the ties and has stepped back from negotiations, which have since been taken over by Russian and Ukrainian diplomats.

A second round of negotiations between Russia and Ukraine is scheduled to begin today in Istanbul, Turkey.