Did Russia's Invasion of Ukraine Drive Gun Sales in America? 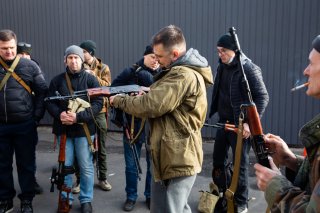 Let's face the facts: most gun owners rarely need a reason to purchase a new firearm. Of course, the pandemic, the wave of social unrest, and the election of President Joe Biden helped drive firearms sales to record levels in 2020.

In fact, even as sales dipped in the late summer and fall, 2021 still had the second-highest level of gun sales. And there are no signs that gun sales will slow down this year. President Biden, who again called for more gun control in Tuesday's State of the Union address, will likely remain the gun industry's best salesman.

But Russian president Vladimir Putin isn't far behind President Biden. The Russian strongman's decision to launch an unprovoked attack against Ukraine may have led to another surge in gun sales in the United States. While sales for February 2022 declined from last year, there was a notable uptick that coincided with the Russian invasion.

According to Small Arms Analytics & Forecasting (SAAF) estimates, February 2022 saw around 1.4 million firearms units sales, a 3.9 percent decline in sales compared to February 2021. SAAF's firearms unit sales estimates were based on raw data taken from the Federal Bureau of Investigation's National Instant Criminal Background Check System (NICS), which was adjusted for checks unlikely to be related to end-user firearms sales. SAAF made certain adjustments to the FBI's raw data based on retailer reports and other information, and its adjusted NICS numbers may still underestimate the actual unit sales level by some amount.

Gun shops in Ukraine nearly sold out as the Russian invasion began last week, and SAAF noted that the United States also saw strong sales in the same time period.

"The estimated U.S. firearms unit sales for February 2022, although in line with the general seasonal pattern seen in the industry, were higher than might have been anticipated given the recent post-Covid-19 pandemic sales slowdown," said SAAF Chief Economist Jurgen Brauer via a statement. "However, it is noticeable that the number of daily NICS background checks conducted on February 24th, 25th, 26th, and 28th (Thursday, Friday, Saturday, and Monday) were unusually high, coinciding with the beginning of Russia's invasion of Ukraine."

Gun sales are always strong in times of uncertainty, so it may not be surprising that events all the way in Ukraine resulted in increased sales in the United States. Another factor could be that firearm owners are also becoming far more diverse. A recent survey conducted by professors at Harvard and Northeastern found that the number of female first-time gun buyers doubled over the past two years. In addition, according to a report from the National Shooting Sports Foundation, gun sales to black Americans increased by 56 percent in 2020.

2022 could already be on track for another strong year for firearms sales.