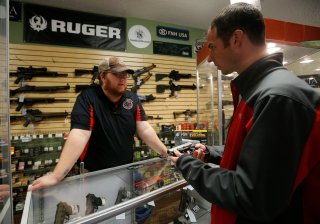 Although Massachusetts has some of the strictest gun control laws in the country, residents in the Bay State seem more than willing to jump through the hoops to exercise their Second Amendment rights. It was announced last week that carry permits in Massachusetts have reached a four-year high.

Under state law, "residents 15 years and older who wish to possess, carry, and transport firearms, ammunition, and feeding devices are required to have a firearms license. Firearms licenses are issued by municipal police departments."

Massachusetts has two different types of licenses based on the type of firearm a resident hopes to acquire. The first is the License to Carry, which allows for the purchase, possession, transportation, and carrying of all handguns, rifles, shotguns, feeding devices, and ammunition. The license also allows the carrying of concealed handguns—either loaded or unloaded. The second is the Firearms Identification Card (FID), which permits the purchase, possession, and transportation of non-large-capacity rifles, shotguns, and ammunition.

In addition to the data from the Executive Office of Public Safety and Security, the Federal Bureau of Investigation's National Instant Criminal Background Check System reported that it carried out a record-setting 262,583 background checks in Massachusetts in 2020. Moreover, with 259,248 background checks carried out in 2021, the Bay State almost surpassed that record last year. By contrast, there were only 153,487 background checks conducted in the Commonwealth a decade ago.

"The demand is pretty high," Jim Wallace, executive director of the Gun Owner's Action League in Massachusetts, told Boston 25 News. "People, in general, are taking more responsibility for themselves. A lot of people have finally woken up and realized the police can't always be there." Wallace added that women are increasingly interested in purchasing firearms for self-defense.

It was also reported earlier this month that firearms sales increased sharply in the days after Massachusetts announced its assault weapons ban in 2016. In a paper to be published in the March issue of the Journal of Empirical Legal Studies, researchers assessed the impact of the 2016 Massachusetts Assault Weapons Ban Enforcement Notice.

The study found that firearms sales actually increased after the ban was introduced. According to the paper, within five days of the Massachusetts Enforcement Notice's announcement, assault rifle sales increased by 560 percent. That number declined at a slower rate than in earlier periods, which suggests that while the Enforcement Notice reduced assault weapon sales in the long run, many banned weapons continued to be sold anyway.

The surge in demand for firearms in a "blue state" with strict gun control laws may highlight that more Americans are opposed to having their Second Amendment rights eroded. In December, a Quinnipiac poll found that 47 percent of registered voters supported calls for more gun control, while 48 percent were opposed. Quinnipiac’s findings marked the lowest level of support for gun control in almost one decade. In addition, a Gallup poll from November found that only 52 percent of Americans were in favor of stricter laws covering the sale of firearms, a 12 percent decrease from 2019.