Why So Many Americans Oppose ‘Gun Control’ Laws 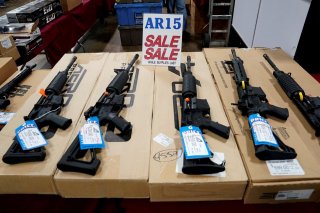 This was certainly the case after recent mass shootings in Atlanta and Colorado.

President Joe Biden and Democrats in Congress immediately called for more extensive background checks and a revival of the 1994 “assault weapons” ban.

But if the history of the last few decades is any guide, this move is unlikely to dissuade Americans from their attachment to firearms. If anything, then it will likely have the opposite effect.

“Before the 1994 ban, Americans owned approximately 400,000 AR-15s, according to government estimates; today, there are approximately 20 million AR-15 style rifles or similar weapons in private hands,” according to The Wall Street Journal.

While Americans make up less than 5 percent of the world’s population, they own nearly half of the world’s privately held firearms, according to a recent Vox article. This is a remarkable statistic.

Longstanding American attachment to firearms is explained away in various ways. The answers usually revolve around blaming the trend on the power of the National Rifle Association, or more commonly these days, “racism.”

The second suggestion is particularly ridiculous. More often than not, gun control has historically been used to disarm black Americans in particular and make it less possible for them to defend themselves.

One historian, Michael Bellesiles, even tried to claim that mass American private gun ownership is an entirely modern phenomenon and has little grounding in the founding era. His book, Arming America: The Origins of a National Gun Culture, won many awards but was ultimately debunked and proven to be based on fraudulent statistics.

In general, these theories wildly miss the mark of why Americans have little desire for strict gun control.

Many discussions around gun control in America focus on background checks and the limitation of specific types of guns. However, if one follows the logic that something must be done until almost every single shooting is stopped, then it’s hard not to see the end goal as Australian-style gun confiscation, which former President Barack Obama called for in 2015.

Evidence for the “success” of Australia’s law is mixed at best and would be an undertaking on a much, much larger scale than what happened in Australia.

In a time of rapidly increasing violence—in part due to the “defund the police” movement—law-abiding Americans are less likely to want to give up their means of self-defense. Politicians, corporate CEOs, and various members of the country’s elite will no doubt have little problem employing government resources and private security for their protection under a regime of stringent gun control. But the average citizen will not.

It must be noted that while firearm ownership has gone up, trust in government—and fellow Americans—has been on the decline for decades. And this gets to perhaps the biggest reason Americans are unlikely to accept strict gun control parameters or even more limited gun control any time soon.

Baked into the ethos of the United States is the belief that liberty and the rights of the people can only truly remain secure as long as the right to bear arms remains secure. There is a good reason for Americans to have this outlook.

History is full of examples of governments using weapons confiscation, gun registry, and mass disarmament of the population as a precursor to tyranny. The American Revolution even began with failed British attempts to disarm the American colonies.

Perhaps one of the most illustrative examples is the great “sword hunt” that took place in Japan in the late sixteenth century. Toyotomi Hideyoshi came to power as second of the three great unifiers of Japan during a century of internal conflict and civil war. His story was particularly exceptional since he rose from the peasant rather than the noble samurai class.

Alas, upon achieving victory, it was clear that Hideyoshi would be no George Washington.

Like most great men in history who’ve achieved absolute power, Hideyoshi became a tyrant who committed a variety of atrocities. He even enacted an edict in 1588 calling for the confiscation of all arms—guns, swords, and pretty much every kind of weapon—from everyone below the ranks of the thin upper crust of Japanese society.

It was justified as a means to control violence and uprisings in the country. The weapons, according to the edict, were to be melted down and used to create a statue of Buddha. A seemingly noble goal with obvious self-interested intent. The truth was the edict was primarily used to suppress any potential opposition to Hideyoshi’s rule and to solidify class lines in the country. An ironic move given Hideyoshi’s humble origin.

The edict did have the practical effect of reducing a certain amount of violence in the country, but it also ensured that there could be no resistance to tax collectors or the arbitrary whims of the powerful few who ruled. This mass disarmament was the Japanese peasantry’s “first step towards enforced serfdom,” according to Danny Chaplin, who wrote Sengoku Jidai. Nobunaga, Hideyoshi, and Ieyasu: Three Unifiers of Japan.

A Jesuit missionary observer of the event, Luis Frois, described how this once well-armed populace became “disarmed” while Hideyoshi became “more secure in his arbitrary dominion.”

The disarmament edict was followed by more repressive laws all meant to control the population and eliminate resistance to the ruling powers. Very soon thereafter, under Hideyoshi’s successors in the Tokugawa Shogunate, religious liberty was curtailed as well.

Christianity was eventually outlawed, and missionaries were expelled from the country. The reforms of this era brought a certain amount of peace but also tyranny, religious repression, and social ossification.

The United States, on the other hand, was founded to be a nation of self-rule, on the idea that all men are created equal, and none have the arbitrary right to lord over others. The Second Amendment and the country’s gun culture flow from these ideas. Fortunately, under the Constitution, Americans have many checks on government power. Protection of the right to bear arms makes it unlikely the government will ever even attempt to suppress liberty as authoritarian regimes have done throughout history.

This is no “fringe” theory, but a direct result of the founding generation’s understanding of human nature, history, and their commitment to creating a free society that could endure for ages to come. Support of the Second Amendment and the right to bear arms is not a call for violence or general resistance to government. In some ways, it’s just the opposite. It provides a more secure guarantee that any mass violence between the state and citizens won’t happen at all. Americans are unlikely to abandon this commitment any time soon.

Entrenched opposition to gun control laws, even following mass shootings, doesn’t come from the power of the NRA. It comes from the foundational worldview of Americans who not only look at gun control measures as unlikely to stop violence, a curtailment of their own means to personal safety, but also fear that they will ultimately be used to undermine liberty.