Portland Proves that Defunding the Police Is a Giant Mistake 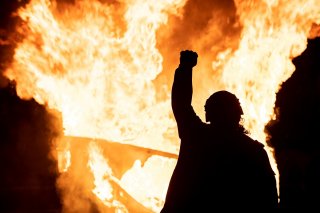 Portland, Oregon, has set a good example of how quickly the breakdown of the rule of law can lead to anarchy and violence.

Of course, radicals have taken advantage of the chaotic situation.

Police recently removed a fence erected around the Mark O. Hatfield U.S. Courthouse in Portland that had been continually besieged by rioters last year.

This was done, according to police, to end the symbolic divide within the community. Immediately after they took the fence down, the rioters returned and mobbed the courthouse.

This scene of wanton vandalism on a federal building has practically become the norm in Portland. Following the protests in the wake of the death of George Floyd in police custody on May 25, the city was beset by unrest that had frequently turned violent.

The response from the city, especially Mayor Ted Wheeler (D), was to appeal to the protesters and appease the demands of activists who pushed for Portland to adopt a grab bag of left-wing ideas. One of the most prominent demands being defunding the police, which at that point had become a national initiative for activists around the country.

Wheeler got his opportunity to grandstand, rebuking then President Donald Trump for offering to send the National Guard to restore order in the city and the Portland City Council reduced the police budget by nearly $16 million.

Hours after Wheeler’s rebuke of Trump, protesters showed up at his house to yell at him for being insufficiently committed to their cause and they’ve found ways to hound and heckle him ever since.

Last year, the city experienced over one hundred days of frequently violent rioting and tens of millions in damage to public and private property.

Worse than the mayor’s folly for bowing to an uncompromising mob was the actual result of defunding the police. Since the protests began the city has witnessed a 2000 percent increase in homicides, according to the Washington Examiner.

This is a gut-wrenching but perhaps predictable turn of events for the West Coast city, but it’s not just a Portland problem. A massive uptick in violent crime has hit cities across the country.

A Fox News report in December that compiled 2020 crime data from police departments around the country showed that many cities had experienced violent crime waves not seen in decades.

As the Fox News report showed, this surge hit not only cities that already had high crime, like Chicago, but other cities like Louisville, Milwaukee, and Minneapolis. And Portland saw the highest increase of all.

It began immediately following the protests beginning at the end of May. Following those protests, activists started a campaign to “defund the police.”

Other cities also took up the torch of this movement and defunded the police. A huge surge in shootings and homicides ensued.

There was clearly a pattern in the homicide increases.

Paul Cassell, a former U.S. District Court and law professor at the University of Utah’s S.J. Quinney College of Law, dubbed this the “Minneapolis Effect,” in research that he conducted on the phenomenon.

“Specifically, law enforcement agencies have been forced to divert resources from normal policing to patrolling demonstrations,” Cassell wrote. “And even as the anti-police protests have abated, police officers have scaled back on proactive or officer-initiated law enforcement, such as street stops and other forms of policing designed to prevent firearms crimes.”

In his research, Cassell estimated that due to this shift in policy and in the effort to answer calls to defund the police, many people were killed who wouldn’t have been otherwise.

Cassell estimate that “as a result of de-policing during June and July 2020, approximately 710 additional victims were murdered, and more than 2,800 victims were shot.”

It’s also noteworthy, given that efforts to defund the police were conducted in the name of saving black lives, that, according to Cassell, “more than 80% of the victims of the increase in homicide are minority victims.”

In the wake of this catastrophe, some cities have been quietly “re-funding” the police. In December, the Minneapolis City Council removed $8 million from its police budget and pledged to reduce the police force in response to calls from activists. Just months later, the city council added $6.4 million to the budget and began hiring more police officers.

Even the beleaguered Portland mayor called for an additional $2 million increase to the police budget and the restoration of a police unit to address gun violence.

It’s a clear sign of the failure of the defund the police movement that not even a year after it began, even the most progressive governments in the country are pulling back from its demands.

Portland and other cities will likely pay a long-term price for the anarchy and chaos that the riots have brought. Many neighborhoods hit by arson and destruction following the riots of the 1960s took decades to recover, and many never did.

That may ultimately be the fate of some cities following the events of 2020. But at the very least, we have seen a clear repudiation of the “defund the police” mantra. Hopefully, it’s a lesson well learned for the future.

The space between order and violent anarchy, it seems, is often just a thin blue line.