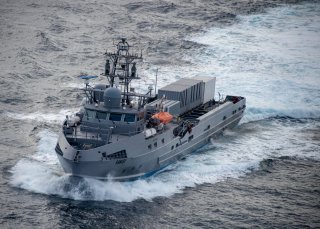 In its quest to get eyes and ears quickly into the water, the U.S.  Navy will likely opt for more unmanned assets rather than traditional manned ships.

“Every partner and every sensor can offer new information that can be added to what we simply call a digital ocean,” said Vice Adm. Brad Cooper, commander of the U.S. 5th Fleet, during an event held by the U.S. Naval Institute and the U.S. Coast Guard Academy.

Unmanned ships in the ocean are “interconnected” Vice Admiral Cooper explained. “They’re controlled by satellite, they have 360-degree high-fidelity cameras. They’ve got radar. They have [automatic identification systems] and they’re just sitting there all day, every day, looking” around for naval traffic.

For high-speed and potentially high-risk situations, some unmanned ships could offer attractive solutions. “You can [send] in a 100-knot USV and get a little closer look without putting people in the mix. That’s the optimal scenario of how we do business. You multiply that by every country in the region having a couple and you can quickly see how your awareness increases dramatically over a short period of time,” Vice Admiral Cooper said.

The Navy could increasingly rely on artificial intelligence to monitor situations and make decisions at sea.

“Is it the fishing vessel? Ok, no big deal. Is it an Iranian Revolutionary Guard ship? Ok, that is a big deal. Or is it something in the middle?”

The U.S. Navy’s 5th Fleet is trying to evaluate unmanned systems quickly and incorporate them into fleet operations soon.

“We’ve been working with a number of companies and over the course of the last month, every week we did an exercise with a different partner, we quickly learned how we can improve on artificial intelligence and implemented [adjustments] in a week,” Vice Admiral Cooper said.

Still, what future unmanned systems look like precisely is uncertain. The U.S. Navy initially surmised it would field a Medium Unmanned Surface Vessel, though that requirement may change based on the capabilities that smaller unmanned vessels are able to offer.