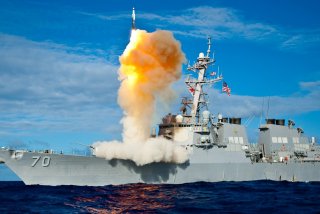 The Missile Defense Agency (MDA) is increasingly capable of tracking and destroying approaching enemy ballistic missiles from “beyond the horizon” at sea, meaning new windows of attack are being made possible through technological advancements. For example, the new Raytheon SM-3 Block IIA interceptor, which has a longer range and is more discriminate, is introducing unprecedented opportunities for ships to track and destroy enemy attacks from safer distances.

The SM-3 IIA variant is now being acquired in large numbers by the MDA, according to a Raytheon announcement. The new weapon is larger and more capable than existing SM-3 weapons, which are intended for less distant threats. Another variable of significance for the SM-3 IIA is its demonstrated ability to extend its range with “engage on remote” technology. This technology connects a forward-positioned radar with a ship- or home-based radar, allowing the system to share information in real-time to identify approaching enemy threats from farther away. A Raytheon “engage on remote” test was able to demonstrate this successfully with an SM-3 IIA as far back as 2020. In concept, this technology would enable a radar based in Japan, South Korea, or Guam to network with ship-based Aegis radars to find a threat much earlier in its flight path.

“‘Engage on Remote’ is an over-the-horizon fire control system. It enables us to see farther west into the Pacific and instruct an interceptor missile to fire at certain coordinates. A radar from another location is feeding it data,” a Pentagon weapons developer said.

Moreover, an anti-intercontinental ballistic missile (ICBM) SM-3 would offer more options to destroy ICBMs as they travel just beyond the boundary of the earth’s atmosphere. The SM-3 Block IIA could complement existing Ground Based Interceptors (GBI) and help the Pentagon bridge the gap between now and the end of the decade, when the new Next-Generation Interceptor ICBM defense system becomes available.

The Pentagon and the MDA are now working on a new interceptor, which is expected to be ready by 2028. In the interim, the military is working to modernize and sustain its current arsenal of GBIs with software upgrades and the addition of more discriminating seekers. Ultimately, the Pentagon hopes to arm GBIs with multiple “kill vehicles” to enable a single interceptor to fire many shots at a single enemy ICBM, thereby increasing the likelihood of a successful kill.

In fact, the requirements for the MDA’s emerging Next-Generationn Interceptor specify the need for a multiple kill vehicle or a series of integrated interceptors capable of discriminating decoys and countermeasures from actual enemy ICBMs.