Does the Nagorno-Karabakh Conflict Prove the Tank is Toast? 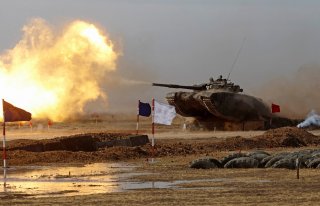 Last month as Azerbaijan and Armenia engaged in the bloodiest fighting in recent years along their shared border, leaving nearly 100 killed, it was noted that multiple aircraft and armored vehicles were destroyed. According to online reports at least ten Azerbaijani tanks and infantry fighting vehicles were destroyed along with four helicopters and some fifteen drones in the first days of the fighting.

Videos released show that at least five tanks hit land mines or were struck by munitions, while other lighter fighting vehicles were also shown to be damaged or destroyed, Forbes.com reported.

Mounting Losses in the Mountainous Region

The rugged terrain in the Caucasus has been the site of countless wars over the centuries. The Greater Caucasus mountain range has historically been a natural barrier between Eastern Europe and Western Asia, and the region is home to Europe's highest mountain, Mount Elbrus. It isn't exactly considered ideal ground for tanks yet this most recent fighting has shown the vulnerabilities of tanks on the modern battlefield.

As the fighting has continued both sides have claimed to have destroyed large numbers of enemy tanks – and the conflict could result in the largest loss of tanks in combat since Operation Iraqi Freedom.

The fact that multiple tanks have been destroyed in short order could be seen to suggest that the day of the tank has passed – that the platform could be too vulnerable to aircraft including unmanned drones. However, some experts suggest it isn't a failure of the tank but rather one that is a tactical training failure.

One issue is that the terrain of the Caucasus may require different thinking in how to deploy tanks, and even military thinkers in Azerbaijan and Armenia have been unable to understand those challenges.

"It's a very messy area with a whole bunch of different players, some of whom are in NATO, some of whom aren't, some are aligned with the Soviets, the Russians," Moran added. "It's all sorts of bizarre terrain combinations. There's isolated water, there's water you can access with big ships, mountains, there's flat space, oil – there's lots of oil."

A concern Moran noted is that neither side has the necessary air defense to help defend units on the ground. As a result those in the tanks can do very little to protect themselves. This is something that is unique to this particular conflict, he added, as most modern armies are aware of such threat and have developed equipment to counter air attacks.

To Tank or Not to Tank

The age of the tank is far from over, but the United States Marines Corps concluded this year that tanks are vulnerable of precision strikes and as the service has sought to transform into a more mobile and lean fighting force it retired the tank after nearly 80 years.

Likewise, the British Army – which introduced tanks onto the battlefield – announced it would scale back its tank force.

However, other powers have sought to ramp up their respective tank forces.

Last month, India began to deploy large numbers of tanks on its border with China where they would operate on the flat plains of the Ladakh Valley. Unlike Armenia and Azerbaijan however, India has a modern air force and air defense weapons to help protect those tanks on the ground. But in war, nothing is ever certain as many a losing power has learned the hard way.