Does Ukraine Need More Tanks for Its Counteroffensive? 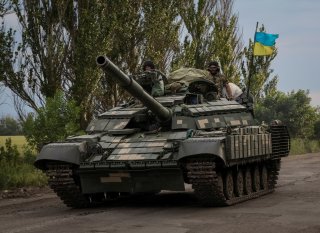 There has been much discussion about how Ukrainian forces have successfully employed anti-armor weapons, dispersed hit-and-run attacks, and disaggregated formations to cripple a larger mechanized force.

Ukraine’s somewhat unexpected success has shifted the momentum of the war and allowed Kyiv to reclaim territory through a counteroffensive, particularly in the northeastern Kharkiv region. This operational shift may indicate that Ukraine now needs some heavy armor to break through more enemy lines to occupy and hold territory.

“We know the Ukrainians have been operating Soviet-style tanks. We know they’ve been employing them to pretty good effect,” a senior Pentagon official told reporters during a background press briefing this week. Ukrainian forces have also captured abandoned tanks left by Russian soldiers, which has bolstered their armored capabilities.

“They’re using a number of tanks that they were able to secure from the Russians. Most recently in Kharkiv, but also before that at the beginning of the fight back in the March and April timeframe when the Russians were abandoning equipment,” the senior official explained.

Ukraine’s military has successfully avoided a linear force-on-force mechanized confrontation. Such an approach will continue to be quite critical, as Ukrainian forces have been able to ambush Russian armored vehicles on bridges, intersections, and other key cross points. As Ukrainian forces continue their counteroffensive, they may be inclined to employ more of a traditional combined arms approach using artillery, long-range precision rockets, and advancing armored vehicles to achieve synergy on the battlefield.

Will Ukraine get more tanks? The Pentagon official did not say one way or the other, however, some NATO allies have donated old Soviet-era T-72 tanks to Ukraine with the promise of being replenished by U.S. Abrams tanks. As the war progresses and Ukrainian forces continue to press their advance, Kyiv would certainly benefit from more tanks and heavy armor.