Is Donald Trump Really Going to Pull U.S. Forces Out of Germany? 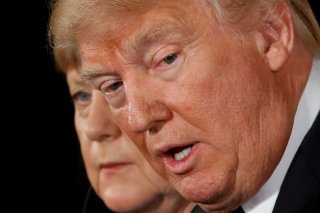 President Donald Trump has informed reporters that the United States plans to withdraw thousands of troops from Germany, cutting America’s presence by roughly one-third. Trump said that the United States is protecting Germany and that “they’re delinquent,” accusing the German government has failed to make its NATO payments.

Trump had confirmed that he intends to pull ninety-five hundred troops from Germany, which would be the largest troop reduction in Europe in nearly a decade—but also the first major cut since Russia’s 2014 military intervention in Ukraine.

In 2014, NATO members had agreed to spend 2 percent of their respective gross national product on military by 2024—while Germany had expected to reach that target by 2031.

Currently, there are some thirty-four hundred U.S. troops in Germany, a figure that has declined significantly since the peak of the Cold War. The call from Trump, which has not been approved by U.S. lawmakers or even discussed with NATO or German officials, has already faced harsh criticism from several prominent Republicans who have largely been allies of Trump.

“We strongly believe that NATO allies, such as Germany, should do more to contribute to our joint defense efforts. At the same time, we also know that the forward stationing of American troops since the end of World War II has helped to prevent another world war and, most importantly, has helped make America safer.

“In Europe, the threats posed by Russia have not lessened, and we believe that signs of a weakened U.S. commitment to NATO will encourage further Russian aggression and opportunism. In addition, the overall limit on troops would prevent us from conducting the exercises that are necessary for the training and readiness of our forces and those of our allies. The troop limit would also significantly reduce the number of U.S. forces that can flow through Germany for deployment to bases around the world, causing serious logistical challenges.”

However, four Republican members of the committee—Mo Brooks (Ala.), Scott DesJarlais (Iowa), Ralph Abraham and Matt Gaetz (Fla.)—did not sign the letter.

Plans to cut the forces have not been finalized.

“The U.S. has made it clear no final decision has been made on how and when,” NATO Secretary-General Jens Stoltenberg said at a news conference on Tuesday. Stoltenberg has said the U.S. presence in Europe was good for Europe and also good for North America and the United States.

There are now twenty-nine NATO members and together they account for 53 percent of the global gross domestic product (GDP). “Half of that total is American but the other half comes from countries like the UK, France, Germany, Spain and Italy. These non-U.S. NATO countries have a combined GDP greater than China’s and, if the United States is included, more than twice as much.”

However, the question is whether NATO is still necessary given the current geopolitical situation in the world. In addition, Germany could be well-positioned to defend Germany because, according to Ted Galen Carpenter, “there is no totalitarian Soviet threat, and the Red Army is not poised to pour through the Fulda Gap in Germany and try to sweep to the Atlantic. Today’s Russia is a pale shadow of the USSR in terms of population, economic output, and military power."