Doomed: The Tragic Tale of How the Navy Lost This One Submarine Forever 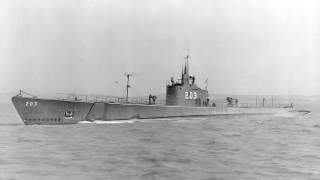 Key point: Several things went wrong for the USS Greyback. The submarine and its crew would not be lucky.

On February 27, 1944, a Japanese Nakajima B5N torpedo bomber patrolling over the East China Sea near Okinawa spotted the glinting hull of a submarine surfaced above the water.

Earlier that very day, the freighter Celyon Maru had been sunk by two torpedoes.

The three-man bomber swooped down and reported a direct hit with a 500-pound, causing the submarine to “explode and sink immediately.”

To play it safe, Japanese warships closed in on a trail of bubbles left at the scene and laced the ocean with depth charges. As concussive blasts wracked the water, a black oil slick surged to the surface.

Ten days later, on March 7, the submarine USS Grayback failed to return to Pearl Harbor from her tenth war patrol as scheduled. Nor did she reply to a radio inquiry three days later.

After waiting three weeks, the Navy listed Grayback and the eighty sailors aboard her as “missing, presumed lost with all hands.”

After the Japanese surrender, researchers correlated Grayback’s disappearance with Japanese records. They concluded 1,652-ton submarine had been on something of a rampage before meeting her last patrol, possibly sinking as many as four ships totaling 21,000 tons.

Seventy-five years later, a privately funded expedition set out to find Grayback’s lost wreck. Team leader Tim Taylor and partner Christina Dennison had previously located the wrecks of four other U.S. World War II submarines as part of a project called Lost 52, leveraging new autonomous underwater vehicle technology that could search wide areas without having to be continuously tethered to a boat.

Two years earlier, I chatted with Taylor and Dennison about their first find in 2010: Navy coastal defense submarine R-12, which sank mysteriously off the coast of Florida, taking with her forty-three crew. They expressed their wish to preserve the memory of the heroic submariners who sacrificed their lives in the conflict and give relatives a sense of closure by identifying the sites of their remains.

According to the New York Times, the wreck’s discovery was only possible thanks to team historian Yutaka Iwasaki finding an error in the latitude and longitude of the original U.S. loss report from 1949, which implied a location 100 miles away from the site of the actual attack.

In June 2019, the team deployed an AUV that spent hours systematically scanning a ten square mile section of seafloor with sonar before surfacing to upload its findings to its mothership for analysis.

That data was used to deploy a second remote-control submarine with powerful cameras that finally revealed the submarine’s wreck 427 meters below the surface.

Video feeds revealed Grayback’s bow had been torn at an angle, and her stern imploded, supporting the report of a direct hit. Her deck gun lay over 100 meters away. But Greyback’s nameplate remained perfectly legible.

The team waited several months for confirmation from the U.S. Navy before declaring their find on November 10, 2019, making sure the relatives of the entombed sailors were amongst the first to see the footage.

But the “Silent Service” was also one of the riskiest occupations in the U.S. Navy, as the loss of fifty-two boats during World War II attests. Planes ambushed submarines recharging batteries on the surface, and escort ships bombarded them with depth charges while submerged. Only rarely did lost submarines leave behind survivors who could attest to their fates.

However, we know a good deal of Grayback’s story, thanks to the Dictionary of American Naval Fight Ships.

Grayback (SS-208) was laid down in 1940 in Groton, Connecticut by Electric Boat and commissioned June 1941—you can see pictures of her here. She was one of twelve Tambor-class fleet submarines—only five of which survived the war.

These medium-sized submarines were fast enough to accompany surface fleets, had an ocean-spanning range of 12,600 miles, and an expanded armament of six 21-inch bow torpedo tubes plus four in the stern, with fourteen reloads available. A 3” deck gun and two rapid-firing anti-aircraft cannons gave the subs modest firepower while surfaced.

The Tambor’s conning tower also featured a Mark III mechanical targeting computer. Most torpedoes then were unguided straight-line weapons. The Mark III not only helped calculate intercepts but could program the torpedoes’ internal gyroscope to slew away after launch, making it unnecessary to turn the entire submarine to aim. Unfortunately, gyros in early-war American Mark 14 torpedoes were notoriously defective.

Five weeks after the attack on Pearl Harbor, Grayback sallied forth on her first war patrol off Saipan and Guam under command of Willard Saunders. Just a week later, she was ambushed while surfaced by a Japanese submarine that launched two torpedoes. Both missed.

For the next four days, the two submarines engaged in a high-stakes game of tag, trying to catch the other exposed on the surface. World War II-era submarines weren’t designed with the capability to attack each other underwater (an event that occurred only once, ever). However, they did have to surface frequently to recharge batteries. A Tambor could go at most two days without surfacing, but only while crawling at 2 knots.

Despite spotting each other multiple times, neither managed to line up another attack. Grayback finally eluded her counterpart on February 26 and sank first victim, the coal transport Ishikaru Maru on March 17 near Chichi Jima.

Grayback skirmished repeatedly with Japanese ships and submarines in the waters surrounding Guadalcanal, on three subsequent patrol damaging but not sinking any. She was damaged in turn by depth charge attacks by ships and Japanese E8N2 floatplane in November 1942.

The Grayback’s fortune turned with her fifth patrol under Lt. Cdr. Edward Stephan begun December 7, 1942. On Christmas Day she pounced on four Japanese barges and sank them with her deck gun. Then at five minutes past midnight on January 2/3, 1943 Stephan spotted the huge Japanese cruiser submarine I-18 south of New Britain—a boat previously involved in mini-submarine attacks on Sydney and Pearl Harbor.

When I-18 abruptly began submerging, Stephan fired two torpedoes. He reported hearing explosions and was credited with a kill. In truth, the Japanese submarine survived only to be sunk on February 11.

Two days later, Grayback received word that six crew of a downed B-26 bomber Queenie had crash-landed on Rendova Island two days early. But locating the airmen and getting them back on board without exposing Grayback was not going to be easy.

On the evening of January 5, two boats rowed ashore while the Grayback hastily ducked back underwater. The sailors found the downed crew and laid low until nightfall, whereupon they used signal lamps to guide their boat back to the waiting sub.

But Grayback’s luck nearly ran out twelve days later when her torpedoes missed a Japanese destroyer escorting a convoy. The destroyer’s counter-attack badly damaged Grayback, forcing her to limp back to Brisbane.

Stephan commanded Grayback on a sixth and seventh patrol—sinking two ships and damaging three more on the latter, before sailing her back to San Francisco on May 30 for a major refurbishment

In September, Grayback cruised back into action under Texan John Anderson Moore who would be awarded a Navy Crosses for each of his three patrols.

Grayback joined submarines Shad and Cero to debut new wolf pack tactics in which they patrolled together to box in enemy ships. This proved a resounding success, with Grayback sinking a tanker and the 8,100-ton armed merchant cruiser Awata Maru, and shared in the sinking of the Fuji Maru with Shad.

Moore’s following patrol, begun December 2, saw the submarine fire off all 24 of her torpedoes in just five days of furious action, beginning with the sinking of a freighter on December 18, northeast of Okinawa. When her radar detected the escorting destroyer Numakaze barreling towards her out for revenge, Moore crash-dived Grayback and launched a spread four torpedoes behind her from her stern tubes. Three hit Numakaze, sinking her.

The sub sank two more freighters the night of December 20/21, and a large sampan with gunfire on December 27.

Grayback’s final patrol (described at beginning of article) was her most effective yet, increasing her wartime gross sunk by nearly a third to 63,800 tons and 14 ships sunk.

The crew of the Grayback, and those of her victims, sacrificed their lives for their countries in a pitiless war of unsurpassed scale and violence. Her rediscovery three-quarters of a century later is a unique opportunity to commemorate the bravery of the eighty souls that remain entombed within her.