From Dropping Nukes To Strafing ISIS: The Story of the B-1 Bomber 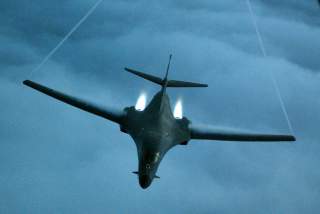 Key Point: With plans to retire by 2036, the B-1 bomber has performed a medley of various tasks and missions for the air force.

The costly new bomber featured swing wings which could sweep forward to a 15-degree angle to maximize lift during takeoff or landing, allowing the 44.5-meter long plane to operate from shorter forward airbases. To minimize drag for supersonic flight, the wings could tuck inwards to a 67.5 degree angle. At high altitude the four B-1A prototypes could achieve up to 2.2 times the speed of sound-assisted by two flexible vanes situated under the nose that help stabilize airflow.

Instead, the B-1B’s aluminum and titanium skin surfaces were reshaped and coated with radar-absorbent materials to reduce radar cross-section to just 2.5 meter, roughly that of a small F-16 fighter. Though far from being a “stealth” plane, the B-1 would not be susceptible to detection and targeting at very long range like a B-52 would be.

Sébastien Roblin holds a master’s degree in Conflict Resolution from Georgetown University and served as a university instructor for the Peace Corps in China. He has also worked in education, editing, and refugee resettlement in France and the United States. He currently writes on security and military history for War Is Boring. This piece was originally featured in November 2018 and is being republished due to reader's interest.