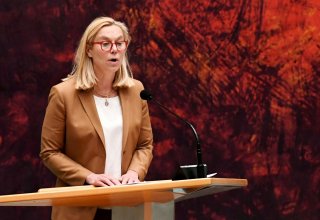 Sigrid Kaag, the foreign minister of the Netherlands, announced her resignation on Thursday after the Dutch parliament accused the cabinet of mishandling the crisis.

The airlift from Kabul evacuated around 18,000 Afghans and foreign nationals from the country, making it the largest evacuation effort in history. However, it was widely criticized for leaving behind thousands of Afghans who sought to leave, many of whom credibly feared reprisals from the Taliban for their service to U.S. and NATO troops.

The airlift’s conclusion on August 31, leaving many of these vulnerable would-be evacuees behind, was the subject of a debate by the Dutch parliament, which then drafted a motion condemning the cabinet for mishandling the evacuation.

These motions are purely rhetorical and do not require resignations. However, Kaag decided to resign anyway, reasoning that the parliament’s condemnation of her efforts compelled her to do so.

The foreign minister announced her resignation on Thursday, stating that while she supported the evacuation efforts, she accepted responsibility for its shortcomings.

“Though I stand by our efforts, as the minister holding final responsibility, I cannot help but accept the consequences of this finding,” Kaag’s statement read. “In my interpretation of democracy and the culture of our government, a minister needs to step down when their policies are rejected.”

Kaag expressed her confidence that the foreign ministry and defense officials would continue to do excellent work after her departure.

Prior to the fall of Kabul, around 160 Dutch troops participated in NATO’s mission in Afghanistan, primarily assisting in the training of the Afghan police force.

In addition to these troops, Dutch military planes evacuated roughly 2,000 Afghans, 1,700 of whom intended to remain in the Netherlands.

However, according to Reuters, hundreds of Dutch civilians—including many Afghan-Dutch dual nationals—were unable to reach the airport, and therefore could not be evacuated. Thousands of Afghans who had worked for Dutch troops during NATO’s twenty-year mission were also stranded.

In the United States, many commentators and government officials, mostly aligned with the Republican Party, have called on Secretary of State Antony Blinken to resign for his role in the crisis.