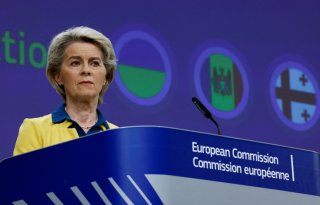 On Tuesday, representatives of the European Union (EU) announced that they had committed 600 million euros, or $630 million, to aid African, Caribbean, and Pacific nations cut off from food imports due to the conflict in Ukraine.

The decision, announced by European Commission president Ursula von der Leyen at the EU’s annual summit in Brussels on Monday, specified that 150 million euros, or $158 million, had been pledged for direct humanitarian assistance, while 350 million euros were earmarked for initiatives to boost sustainable food production outside of the conflict area.

Von der Leyen emphasized that the EU acted to prevent mass starvation in the developing world, which has faced acute food shortages following the Russian invasion of Ukraine in late February.

“Russia’s war of aggression is taking a heavy and senseless toll, not only on the Ukrainian population but also [on] those most vulnerable around the world,” von der Leyen said, adding that the Kremlin was “still blocking millions of tons of desperately needed grain” by preventing exports from Ukrainian ports.

Before the Russian invasion, Russia and Ukraine together produced one-third of the world’s wheat and more than two-thirds of its sunflower oil. The conflict and Russia’s blockade of Ukraine’s remaining ports along the Black Sea have blocked an estimated twenty million tons of Ukrainian grain from export to developing nations in Africa, the Middle East, and Asia—many of which lack the resources to replace agricultural imports with domestic production. Consequently, the crisis has raised the risk of mass starvation among food-importing nations in the developing world. The United Nations Food and Agriculture Organization estimated in June that the food crisis could lead to food insecurity for an additional 180 million people across forty-one countries.

The UN has pushed Russia and Ukraine to reach a deal allowing for Ukrainian agricultural exports, with Turkey serving as a neutral mediator, but negotiations have made little headway. At the same time, Ukraine has attempted to boost its exports via the country’s railways, although rail transport of the grain is far less efficient than sea transport. Russian officials have stated that they are willing to allow food exports from Odessa, Ukraine’s largest-remaining port, but other factors, such as Ukrainian mining operations along the Black Sea coast, have delayed progress. The Kremlin has also claimed that agricultural price increases are tied to Western sanctions against Russia, claims that the European Union and the United States have dismissed.