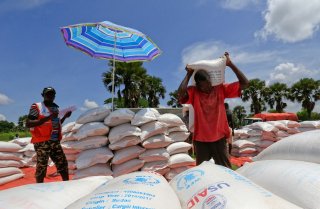 The United Nations World Food Programme (WFP) announced earlier in the week that roughly 30 percent of Sudanese civilians are facing an acute shortage of food. The international organization attributed the situation to a deadly combination of global factors, including the war in Ukraine, a period of drought in Sudan, and political turmoil following a military coup in October 2021, which resulted in mass protests and a government crackdown.

The WFP’s report, published on Thursday, indicated that at least fifteen million Sudanese face acute food insecurity across Sudan, with none of the country’s provinces spared from the crisis. The report warned that acute food insecurity, defined as a lack of food that puts a person’s life at risk, “may dramatically increase to unprecedented levels and ultimately lead to more conflict and displacement” unless the international community took immediate action to rectify the crisis through additional funding or grain shipments. It added that the percent of Sudanese facing food insecurity is expected to rise to forty percent by September if current trends continue.

The burgeoning humanitarian crisis in Sudan has received renewed attention from other international organizations, including the United Nations Ineternational Children’s Emergency Fund, Plan International, World Vision, and Save the Children—all of which collectively warned that three million Sudanese children, or roughly seven percent of the country’s total population, are suffering from malnutrition. The four organizations warned that as many as 375,000 could die by the end of the year without outside assistance.

Sudan’s internal tensions have dramatically increased since October 2021, when Sudanese military leader Abdel Fattah al-Burhan launched a military coup, deposing the country’s civilian leadership and installing himself as its de facto dictator. The country had operated under a joint civilian-military administration since early 2019, following the overthrow of longtime Sudanese dictator Omar al-Bashir after weeks of enormous public protests.

Although Burhan has been able to maintain control despite protests against his government, international aid to Sudan dried up after the coup, complicating the country’s ability to respond to the emerging humanitarian crisis. The United States, the World Bank, and other financial institutions have insisted that Burhan step down and return power to a civilian administration as a precondition for further aid—a step that Burhan does not appear likely to take.