Explosions at Crimean Air Base Did More Damage Than Russia Claimed 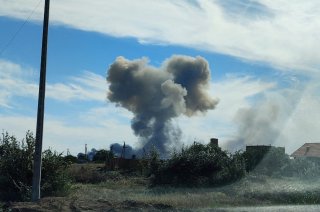 Satellite images released on Thursday suggest the damage from the blasts at a Russian air base in Crimea is worse than initially claimed by Russian authorities.

The two photos provided by the firm Planet Labs, one taken before and the other taken after the blasts, appear to show damage to at least eight of the aircraft stationed at the Saki Air Base near the village of Novofedorivka in Russian-annexed Crimea. Nearby structures, including storage sites, appear to be largely intact. The photos undermine Russia’s claim that no aircraft were damaged by the explosions.

Kyiv has not taken responsibility for the blasts. “Officially, we are not confirming or denying anything; there are numerous scenarios for what might have happened... bearing in mind that there were several epicentres of explosions at exactly the same time,” Ukrainian presidential adviser Mykhailo Podolyak told Reuters. “I think that Russian military guys in this airbase ruined their very simply known rule: don’t smoke in dangerous places,” said Ukrainian defense minister Oleksiy Reznikov. “That’s it.”

Moscow officials and local authorities maintain the explosions were triggered by an unspecified “accident.” However, experts say the presence of three craters at the site points to a deliberate attack. Ukrainian presidential adviser Oleksiy Arestovych said in an interview that the explosions were caused by a Ukrainian missile strike or the work of partisans in Crimea. U.S officials have told the Washington Post that no U.S. weapons were used in the attack, which, if true, would rule out the possibility that American-provided HIMARS systems were involved in the Saki airfield explosions. At the same time, experts have all but ruled out the use of Ukrainian makeshift or modified weapons. “To be that accurate at that range with possibly an experimental munition is unlikely,” Louise Jones, head of intelligence at McKenzie Intelligence, told the BBC.

Kremlin officials have insisted that a strike against Crimea, annexed by Russia in 2014, would trigger swift and massive retaliation. “Moscow considers it [Crimea] now part of Russia. Doctrinally, strikes on Russia would call for retaliation and further escalation,” Rebekah Koffler, a former DIA intelligence officer, told Fox News. Koeffler suggested that reports of the attack could be part of a larger information battle between the two sides. “While I don’t completely rule out the possibility of Ukrainian resistance staging detonations in Crimea… missile strikes by Kyiv on Crimea are highly unlikely,” she said. “The Ukrainians know that it would be a red line for Putin because Russia annexed Crimea in 2014.”