The F-35: Could It Actually Endanger Peace in the Middle East? 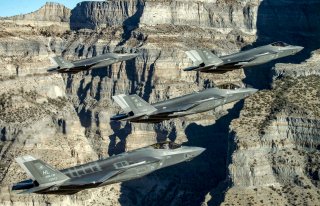 Such a deal would be a significant “breakthrough” and an important staging moment towards comprehensive Middle East peace—but there could be a serious sticking point.

That is the U.S.-built F-35 Joint Strike Fighter.

The two countries must now get past the controversy over the fifth-generation stealth fighter jet if they are to cement a stronger regional partnership. At issue is the fact that while Israel has had operational F-35 jets since 2017 and is currently transitioning to make the jets its main fighter aircraft within the next few years, there is the opinion that even those Arab nations that make peace with Israel shouldn’t also be flying the same aircraft.

Israel has two operational squadrons—with the second squadron only declared operational earlier this month—and moreover the country’s air force has conducted exercises with the U.S. Central Command earlier this year. The State of Israel is expected to eventually have at least fifty of the F-35 Joint Strike Fighters in its air force and that would give them a serious advantage over potential foes.

It now seems that the UAE could get the aircraft, a move that caused Israeli prime minister Benjamin Netanyahu to publicly oppose the sale even if it is part of the UAE-deal—which in turn angered the government in Abu Dhabi at the very beginning of a public friendship.

While this may seem a strange course of action for Jerusalem to take, it needs to be remembered that Israeli security doctrine is based on the qualitative superiority over its neighbors and potential rivals. Israel sees the need to obtain the most advanced military technology from the United States—or develop it domestically—but then also denies said technology to its enemies or even those potential rivals. As a nation that has existed surrounded by those openly hostile, Israel must accept a real possibility that today’s friends could be tomorrow’s enemies.

At one time Israel had a close relationship with Iran, a friendship that lasted for nearly thirty years until the Islamic Revolution of 1979—and a return to such friendship seems nearly impossible given that the states have been openly hostile for more than forty years! Likewise, Israel had once been closer to Turkey and there is a very real possibility that the two nations could become regional rivals at worst and unfriendly partners at best.

Yet, it is the situation with Iran that actually comes into play, which could enable Israel and the UAE to get past any serious issue over the F-35 jets. Both nations see Iran as a serious threat in the region, and an anti-Iranian alliance is in the best interest for the nations.

As the Asia Times reported, “the F-35 sale will almost definitely take place and the issue in Israel-UAE relations will be worked out, most likely by offering Israel access to yet more advanced weapons systems. The shared interests of the UAE, Israel and the U.S. transcend anachronistic quarrels over the Qualitative Military Edge.”

This is a new relationship and it is when partners learn a bit about one another and need to settle differences if they’re to stick together. The threat from Iran may be enough to keep the two new partners at least semi-happily together.