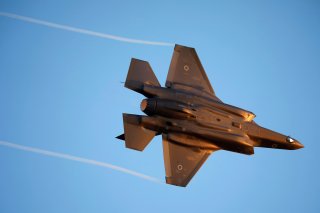 The United Arab Emirates sent F-16 jets to Crete for joint drills with Greece on August 25. The drills are part of an emerging alliance between the UAE, Egypt, Greece and Cyprus—one that seeks to counter Turkey’s claims to a swath of the Mediterranean between Turkey and Libya. Israel, which is normalizing relations with the UAE and has supported Greece in the Mediterranean, is also part of this emerging alliance. However, the deal with the UAE and Israel is already facing controversy because of Israel’s concerns about U.S. sales of F-35 fighter jets to Abu Dhabi.

The intricate web of issues that connect the stealth jets to the Israel-UAE deal and Secretary of State Mike Pompeo’s visit to Israel on August 24 and the UAE’s F-16 jets being sent to Crete is complex. It boils down to a few simple agendas. The Emirates has been requesting F-35 jets, a fifth-generation advanced stealth aircraft, from the United States. Israel wants to maintain a qualitative military edge over other countries in the region. The United States wants to make the UAE-Israel deal work. Israel and the UAE want the deal to work but both countries have differing needs, not the least of which is Israel’s internal politics which has seen three elections in the last year and a half.

Israel is the only country in the Middle East to have already acquired the F-35 fighter jets. Israel has two operational squadrons and has been doing exercises with U.S. Central Command this year. It is supposed to acquire at least fifty of the aircraft, and possibly more. Turkey, a member of NATO and a participant in the F-35 program, was supposed to receive the F-35 jets but Ankara’s desire for Russian S-400 air defense has put delivery on hold. In this context, the delivery of the F-35 jets to the UAE would be a gamechanger for Abu Dhabi. It appears the UAE will eventually get the aircraft but Israeli prime minister Benjamin Netanyahu has paid lip service to opposing U.S. sales as part of the UAE-Israel deal. This has angered the UAE at the very outset of a new relationship with Jerusalem.

Abu Dhabi appears to be taking the F-35 jet issue seriously with reports that at least one high-level meeting was postponed due to perceptions of continued Israeli opposition to the sale of F-35 jets. It remains to be seen if the reports about the canceled or postponed meetings were only leaks to pressure Israel to provide a more positive statement on the F-35s or if it is a more serious impasse now between Jerusalem and Abu Dhabi. The deal between the UAE and Israel has no shortage of enemies in the region and even critics in the West and Washington. That means there are those who may benefit from embarrassing both Netanyahu and making the agreement appear more controversial than it is.

For instance, on August 24 the health ministers of the UAE and Israel held a phone call. The media in Israel is asking which state in the region might be the next to normalize relations. Rumors point to Sudan or Bahrain while Morocco has rejected claims it might normalize relations. Saudi Arabia has said normalization can only come with progress on the Israel-Palestinian issue. Meanwhile, Israel is also in discussions with Qatar about reducing tensions with Hamas in Gaza. Hamas controls Gaza and Qatar regularly provides funding for Gaza, meaning it is a conduit to discussions with Hamas. At the same time Turkey, which harshly opposed the UAE-Israel deal, held high-level meetings with Hamas on August 22.

The Hamas meetings with Turkey, which took place in Istanbul with President Recep Tayyip Erdogan, combined with Turkey’s opposition to the UAE-Israel agreement would appear to provide the perfect opportunity for Israel and the UAE to climb down over tensions regarding the F-35 jets and push forward with more joint coordination. The Crete exercise with the UAE F-16s would provide a perfect opportunity for those types of joint activities, trending towards a closer UAE-Israel-Greece-Cyprus-Egypt alliance. France, which signed a defense pact with Cyprus that took effect on August 7, could be involved as well. Recent developments include the following: Greece and Egypt agreed on a maritime borer deal on August 6. Israel and Greece and Cyprus also agreed on a pipeline deal that was finalized on July 20. Together France, Cyprus, Egypt, Greece and the UAE all condemned Turkey on May 13. The only missing partner in the May condemnation was Israel, which publicly backed Greece on August 12 just as the UAE-Israel deal was about to be announced.

It appears increasingly that domestic politics in Israel can derail parts of the UAE deal as much as regional issues. While the regional developments, including opposition from Ankara and threats from Iran, have pushed the UAE and Israel closer, Netanyahu faces troubles at home. After three elections he formed a coalition government earlier this year. However, he had to postpone a budget deal with his coalition partner Benny Gantz of the Blue and White party. Netanyahu and Gantz have warned of new elections, an unprecedented fourth election in two years. Poll numbers show Netanyahu would outperform Gantz. Reports indicate that Netanyahu sidelined Gantz, who is his defense minister and is also the alternate prime minister, in the UAE deal. This is why Gantz slammed Netanyahu over the F-35 jet issue and whether the jets were secretly part of the UAE-Israel deal. Netanyahu denies this. What is important is that the F-35 jets are now part of domestic Israeli political football. They were on the front page of leading Israeli newspapers over the weekend of August 23.

This means more is at stake than just Israel’s qualitative military edge. Even with a handful of F-35 jets in the hands of the UAE Israel would easily maintain its qualitative military edge. That means that accusations that Israel’s military supremacy is in doubt over the deal is largely a domestic political issue. However, it has the chance to cast a shadow over the UAE and embarrass UAE leaders who went out on a limb for the agreement with Israel, taking a chance at a new peace agreement that is the first in a generation in the Middle East. If Israel and the UAE can quickly surmount the F-35 issue, then they will be able to move towards a wider regional strategic consensus on several issues. But if the issue continues to cause controversy, then the UAE may wonder if it got everything it wanted from this agreement.