Will Donald Trump Sell F-35s and Drones to the UAE? 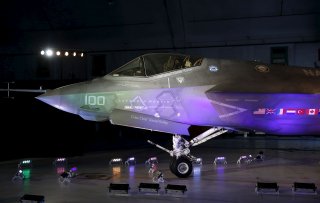 Days after a historic bilateral agreement by the United Arab Emirates (UAE) to normalize relations with Israel, there are questions in Israel about whether this will mean new arms sales to Abu Dhabi by the United States, potentially eroding Israel’s qualitative military edge. Israel’s leading daily newspaper Yediot Ahronot claimed on Tuesday that the Trump administration “is set to sell F-35 fighter jets and advanced drones to the UAE in a secret clause that was part of the agreement to establish diplomatic ties between Israel and the Gulf nation.”

The explosive story was quickly denied by Israel’s Prime Minister, leaving questions about whether the deal with the UAE nevertheless is part of a wider strategic paradigm in the region that will see new arms sales to the Emirates, but not sales of the advanced fifth-generation warplane.

Currently, Israel is the only country in the Middle East with the stealthy F-35. Israel’s two squadrons of F-35s, the second of which became operational in August 2020, regularly practice with U.S. F-35s that fly in from Central Command’s base at Al-Dhafra in the UAE. Turkey was part of the F-35 program, but delivery of the aircraft to Ankara was put on hold after Turkey acquired the Russian S-400 air defense system.

The F-35 is a key part of Israel maintaining a qualitative military edge, an important part of the U.S.-Israel relationship that provides Israel access to advanced weaponry and has become part of key Israel-U.S. defense industry relationships. For instance, the Israeli Iron Dome system, which was financially supported by America, is now being built in the United States in a joint venture between Raytheon and Israel’s Rafael Advanced Defense Systems. The qualitative military edge concept means Israel will have greater access to superior weaponry than other states in the region, even other U.S. allies. That doesn’t necessarily mean the F-35 couldn’t ever be sold to these other countries, but that Israel would maintain a larger or more advanced number of squadrons.

For instance, Saudi Arabia and Egypt both have acquired large amounts of U.S. military equipment. The UAE has been seeking F-35s for years and Defense News predicted in 2017 that it might get approval for the jet in the early-2020s. It may, therefore, not need a secret clause in the deal with Israel to get the planes anyway. Regardless, any deal involving F-35s can’t be kept secret, so the concept that something so important would be a secretive addendum seems far-fetched.

Former U.S. envoy for Middle East peace issues Jason Greenblatt reportedly said on August 18 that the Trump administration would never agree to a military deal that puts Israel in danger. However, advanced weapons sales to the UAE likely doesn’t put Israel under any threat. This is because Abu Dhabi and Jerusalem generally see the region through a similar lens. They both see Iran as a threat and also believe groups linked to the Muslim Brotherhood, such as Hamas, are hostile.

Israel’s Haaretz predicted that the UAE deal was not about F-35s but rather other defense technology sales. This could include drone procurement or other technology from either Israel or the United States. The day after the UAE-Israel deal was announced, both The Washington Post and The New York Times predicted that the deal could lead to the UAE acquiring advanced drones or other “previously off-limit U.S. weaponry.”

The UAE has long requested armed drone sales from the United States, dating back to 2004. Abu Dhabi Crown Prince Mohamed bin Zayed al-Nahyan had sought out armed drones for fifteen years prior to the normalization agreement with Israel. It would seem that armed drone procurement could not be an immediate driver of the normalization, but it could be a byproduct. Export controls and other factors kept U.S. armed drones such as the Predator or Reaper from being exported to U.S. allies in the Middle East. Requests from Jordan and the UAE were denied and both countries then approached China. Washington did approve a sale and delivery of the unarmed Predator XP in 2017 and, in 2019, approved more sales of the Blackjack UAV. The Trump administration changed the U.S. approach to the Missile Technology Control Regime that regulates large armed drone sales, with the intention of exporting more U.S. drones. However, those changes only took place in the summer of 2020 after Chinese armed drones made major inroads in the Gulf.

Israel defense companies Israel Aerospace Industries and Rafael signed a deal with Abu Dhabi’s Group 42 to work together against the coronavirus. The Israeli companies are not only leaders in defense technology but also areas such as artificial intelligence that could help predict and identify coronavirus threats. The deal could pave the way for more Israeli inroads in the Gulf and potentially puts Israeli defense companies in touch with other regional counterparts. However, Israel guards its defense technology closely and also works tightly with U.S. counterparts from Lockheed Martin to Raytheon and Boeing. That means that the chances of Israel’s leading defense systems being sold to the Gulf, when they face export license and hurdles, is likely more hype than reality.

Israel has, in the past, run into U.S. complaints about arms sales abroad, such as discussions in 2005 about upgrading Chinese Harpy drones that Beijing had purchased in the 1990s. Turkey also bought Israeli Heron drones in 2005 but later had a falling out with Israel. Now Turkey makes its own line of innovative Bayraktar and other drones. Russia sought out Israeli drones in 2015, rebranding them as its Forpost drone. Iran is believed to have tried to reverse engineer not only Israeli drones, such as its Shahed 129, but also Israeli anti-tank missiles. All of this makes Israel wary of having its technology fall into the wrong hands. Moreover, because Israel conducts joint defense tests with America, such as the recent Arrow 2 test that was conducted with the Missile Defense Industry, Washington and Jerusalem would coordinate closely on these arms sales issues. A new U.S. administration might also reverse the Trump administration’s desire to expand armed drone sales. All of this is key to understanding the reports and speculation that the Israel-UAE deal might lead to arms sales.