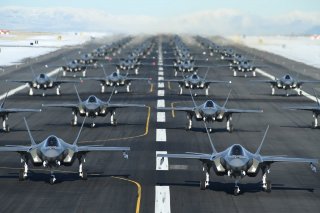 While Iran’s military might not present what U.S. military planners refer to as a pressing or major-power, near-peer kind of threat, the country’s existing force is nevertheless taken quite seriously at the Pentagon for a number of reasons. After all, Iran has an emerging nuclear weapons threat, regional territorial ambitions, support and funding for anti-U.S. terrorist groups, alliances or cooperative relationships with U.S. adversaries and conducts overt maneuvers to intimidate or threaten safe maritime passage in the Strait of Hormuz.

Clearly, any successful military campaign against Iran would of course rely almost entirely upon an ability to quickly achieve air superiority, something which would require the destruction of Russian-built S-300 and S-400 air defenses. These weapons, of course depending upon the extent to which they have been modernized, present very serious threats as they are increasingly networked with faster digital processors, wider radar apertures and much longer ranges.

So what might some kind of U.S. military strike or attack campaign against Iran consist of?

One immediate factor might be the F-35 stealth fighter jet, simply because any kind of air supremacy would first need to be established before a fourth-generation aircraft or less stealthy airplanes to strike. The F-35 jet might prove to be a particularly relevant choice given that the Russian-built S-400 missile system is road-mobile and can therefore easily reposition. A high altitude bomber, while likely fully undetectable, might greatly benefit from the lower altitude, yet still stealthy, highly maneuverable F-35 jet able to track and shoot down moving air defense targets. The combination of speed, computer processing and sensor range and fidelity give the F-35 jet a unique and potentially unparalleled ability to destroy a mobile S-400 missile system.

Groups of networked F-35 jets are able to share information in real-time through their Multifunction Advanced Data Link could use long-range targeting sensors to help find Iranian air defenses on the move, and then move in to destroy them. It also goes without saying that fifth-generation stealth and speed would position the F-35 jet such that it would be likely to prevail in any air-to-air engagements against Iran’s fourth-generation fighter force. Most of all, an F-35 jet could open up an air corridor for a large-scale air attack.

Air dominance would naturally be needed to precede any kind of major ground incursion to ensure survivability and favor success for U.S. Army ground forces confronting thousands of Russian-built T-72 Iranian tanks. Global Firepower 2021 reports that Iran is believed to possess as many as 3,709 tanks and 8,500 armored vehicles, a sizable mechanized force if even technologically inferior to the United States. Advancing U.S. tanks would not only need time to deploy but would of course need air supremacy and air support so as not to be vulnerable to Iranian fighter jets. F-35 jets could help establish a safe perimeter around locations where U.S. ground forces might want to establish space to assemble and deploy inland for an invasion into Iran. With a ground attack such as this, particularly against an Iranian Army in possession of larger numbers of mobile armored vehicles, many moving targets are likely to emerge.

Given the range and fidelity of its sensors, coupled with its threat library database able to verify targets, the F-35 jet might be ideally suited to provide close air support for advancing armored forces as well as respond quickly to attack new enemy targets once they are discovered.