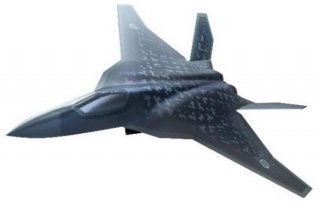 In an ambitious bid to modernize its aging air force, Japan’s Defense Ministry is forging ahead with plans to procure a sixth-generation fighter jet.

Japan’s Defense Ministry first floated the idea of developing a sixth-generation fighter platform in the late 2000s. The X-2 Shinshin concept demonstrator took to the skies in 2016, showcasing just how seriously Tokyo—which persistently sought to import the U.S. F-22 Raptor—takes air-to-air capabilities. With a seeming lack of technical progress and political interest, it was widely assumed that Japan’s Air Force had shuttered its sixth-generation fighter project in favor of a massive F-35 stealth fighter jet procurement bid. But, over the course of 2019, it became clear that Tokyo intends to pursue both fighter initiatives simultaneously.

Earlier this year, Japan’s Defense Ministry announced an impressively rigorous development and production roadmap for its upcoming indigenously-produced fighter, tentatively called the F-X aircraft. The core design, including airframe and engine, will be finalized by the end of March 2021. A prototype will enter production in 2024, with its maiden flight and testing set for 2028. The F-X aircraft, which is sometimes unofficially referred to as the F-3 fifth-generation fighter jet, will enter serial production in 2031 and begin to be transferred to the Japanese air force in the mid-2030s, right around the time that the F-2 jet is due to be phased out. Most recently, Tokyo took the widely anticipated step formally awarding the F-X aircraft contract to Mitsubishi Heavy Industries (MHI). Though the bulk of the production work will be helmed by MHI, Lockheed Martin and Boeing have expressed interest in helping the project by supplying radar technologies and other avionics.

There is little concrete information on the F-X aircraft, and what little we do know is liable to change as the fighter moves along in the research and development stage. Nevertheless, the project’s contours are beginning to take shape—it is widely believed that the F-X aircraft will take the form of a long-range air superiority platform to square off against the latest Chinese fighters over the East China Sea and Sea of Japan. The fighter will possibly feature the Joint New Air-to-Air Missile (JNAAM), co-developed by Japan and the United Kingdom while exhibiting the X-2 Shinshin’s strides in stealth features and supermaneuverability.

The Defense Ministry is pursuing plans to develop the F-X aircraft at the same time as Tokyo is poised to become the largest importer—at 105 F-35A’s and 42 F-35B short-takeoff-and-vertical-landing variants—of Lockheed Martin’s fifth-generation F-35 jet. Given the F-X’s apparent focus on long-range air-to-air capabilities, the role overlap between the two fighters will likely prove to be small. Further still, Japan has emphasized that the F-X is being designed to be as interoperable with Japan’s US fighters as possible. It is unclear precisely what form this interoperability will take, though wide-ranging compatibility with U.S. air-launched weapons and communications networks seem as two likely outcomes.

It remains to be seen if Japan’s defense sector can juggle two costly procurements at the same time. Japan’s current F-35 jet contract is valued at around $23 billion, while the F-X program is expected to cost Japan another $45 billion.