This Failed Combat Program Is Still Transforming the U.S. Army 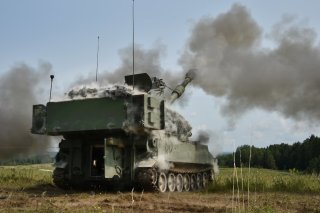 Although the program wound up being canceled by former Defense Secretary Robert Gates in 2009 for a variety of reasons, including not being survivable enough, its fundamental operating concept of an interconnected, force-wide “system-of-systems” network seems to have endured to a certain extent. Although deemed a “failed program” due to challenges with technological maturity, survivability, and perhaps overly ambitious networking goals, the FCS effort did achieve a number of successes, and its concept of an interconnected or “networked” force continues to inform and inspire current notions of warzone networking.

Assistant Secretary of the Army for Acquisition, Logistics, and Technology Douglas Bush closely tracked the FCS as a professional staff member with the House Armed Services Committee during the height of the program’s development in 2007 and 2008. Now, as the Army acquisition executive, Bush sees both parallels and large differences between what was envisioned for FCS and what is now taking shape with the Army combat network.

“I think the idea of having a network to do what was envisioned with FCS is still a valid one,” Bush told The National Interest in an interview. “I think the big difference now is it's not part of one big program. The network is not a program. It's a collection of many, many programs that we're integrating across the many elements of the Army.”

It could be said that Army experiments such as Project Convergence, which has demonstrated a breakthrough ability to network manned and unmanned platforms across multiple domains in seconds, represent the ultimate culmination of the services’ long-standing networking goals. While Army senior leaders emphasize that Project Convergence is a “campaign of learning” or an “experiment” intended to demonstrate paradigm-changing technological capacity, the exercise has been able to show that artificial intelligence-enabled computing can organize and analyze data from otherwise disparate pools of incoming sensor information to reduce sensor-to-shooter time from minutes down to seconds across the force.

“I think also having the network kind of as a separate activity is also just way more flexible. It's not one giant thing … so if part of it goes wrong or just goes slower, we can mitigate in other ways by bringing in different technologies. I think having it as a separate thing running on its own track … and then figuring out how we integrate vehicles into it is a little easier than what the Army took on with FCS, which was really trying to do both at the same time,” Bush said.

The Army has been integrating evolving groups of interwoven technologies called Capability Sets, designed to upgrade and increase speed and functionality quickly as new technology arrives. Last year, the Army fielded Capability Set 21 and plans to prepare one for next year all the way through 2027, Bush indicated.

“A lot of the network, by the way, is commercial off-the-shelf technology, which is another thing the Army wasn't doing as much in the past. We really want to do a lot more now in the network space, because that's where the innovation is. In the private sector network, innovation just never stops. So we have to be flexible enough to take advantage of it. I think we're postured well to do that,” Bush said.