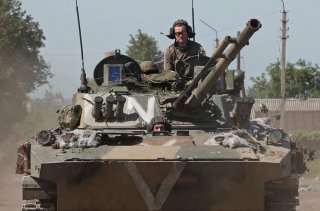 Kremlin spokesman Dmitry Peskov told NBC News that Moscow cannot guarantee the safety of the two U.S. military veterans reportedly captured by Russian forces last week in the suburbs of Kharkiv.  “It depends on the investigation,” Peskov said when asked if the two Americans will meet the same fate as the Moroccan and British citizens who are set to face a firing squad after being sentenced to death by a court in the pro-Russian breakaway Donetsk People’s Republic (DPR).

The two U.S. fighters, Alexander Drueke and Andy Huynh, were “involved in illegal activities” in Ukraine, said Peskov. “Those guys on the battlefield were firing at our military guys. They were endangering their lives,” he said.  “There will be a court, and there will be a court decision,” Peskov said, adding that “they should be punished.”

Peskov framed the upcoming hearing as the legal process of an independent state in which Moscow does not have the right to interfere; the Kremlin recognized the DPR and neighboring Luhansk People’s Republic (LPR) as sovereign countries on February 21, three days before the Russian invasion of Ukraine.

The U.S. State Department issued a response to Peskov in a statement: “We call on the Russian government—as well as its proxies—to live up to their international obligations in their treatment of any individual, including those captured fighting in Ukraine.”

Drueke’s mother told the Washington Post that he “went over there not to fight, but to train” Ukraine’s armed forces. Huynh’s fiancee, Joy Black, said Huynh felt compelled to volunteer to aid Ukraine in its effort to repel the Russian invasion.

Moscow has maintained since the start of the conflict that the protections afforded to prisoners of war by the Geneva Convention do not apply to “soldiers of fortune.” Russian officials have threatened Western volunteers, considered mercenaries by Moscow, with harsh consequences for fighting on the Ukrainian side. "Some Western countries have been encouraging their citizens at the government level to participate in combat operations in the capacity of mercenaries against Russian forces in Ukraine,” said Russian Defense Ministry spokesman Igor Konashenkov in March. “All responsibility for the death of this category of foreign nationals in Ukraine will rest squarely upon the leaders of their respective countries," he warned.

Peskov’s comments have sparked concerns that Russia and Russian-aligned separatists could be planning to make an example of Western volunteers with a slate of highly publicized death sentences intended to dissuade others from following in their wake.