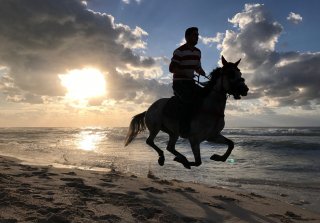 Brahim Ghali, the leader of Western Sahara’s Polisario Front, claimed on Tuesday that the group’s war against Morocco would continue until it withdrew from its occupied portion of Western Sahara.

“There will be neither peace, nor stability, nor a just and lasting solution to the Moroccan-Saharawi conflict unless the U.N. Security Council assumes its responsibilities in responding frankly and firmly to the aggressive and expansionist practices of the Moroccan occupying power,” Ghali proclaimed to Sahrawi refugees in the Dajla refugee camp in southern Algeria.

The legal status of Western Sahara has always been contentious. Prior to 1975, it was administered as “Spanish Sahara” by Spain; immediately prior to the death of Spanish dictator Francisco Franco, it was given to Morocco, against the wishes of the native Sahrawi people. Consequently, the Polisario Front, a rebel group that had formed to fight against Spain, switched to targeting Morocco and launched a fifteen-year guerrilla war against Moroccan troops.

Although the war ended in 1991 ceasefire, which codified the division of Western Sahara into two zones—a small eastern sliver administered by the Polisario Front, christened the “Sahrawi Arab Democratic Republic,” and the other administered by Rabat—the Polisario Front has never abandoned its claim to the remaining portion of the country and renounced the ceasefire in November 2020. At the same time, the government in Rabat has incentivized hundreds of thousands of Moroccans to move south into the disputed territory, giving them a demographic advantage, and constructed a massive, 1,700-mile sand wall dividing its two zones.

Many nations and international organizations have supported the Polisario Front diplomatically, and the United Nations classifies Western Sahara as a “non-self-governing territory,” a classification formerly reserved for territories ruled by colonial powers. However, only around forty nations recognize the Western Saharan government. The United States is not one of them; following Morocco’s participation in the 2020 Abraham Accords between the United Arab Emirates and Israel, President Donald Trump announced via Twitter that the United States recognized Moroccan sovereignty over Western Sahara. While the Biden administration has remained quiet on the issue, this has been taken by some to mean that the Trump-era recognition will continue—although the United States has conspicuously not carried out actions, such as opening a consulate in the disputed territory, that would signal its recognition.

The UN has officially thrown its support behind a referendum on Western Saharan independence, but such a referendum has yet to occur. UN Secretary-General Antonio Guterres recently appointed Staffan De Mistura, a Swedish-Italian diplomat and former UN Special Envoy for Syria, as the organization’s envoy for Western Sahara.