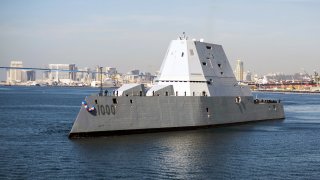 The U.S. Navy formally has taken delivery of USS Zumwalt, the first in a three-ship class of large, stealthy destroyers, each costing around $7 billion.

But don’t get too excited. DDG-1000 Zumwalt still needs a couple more years of testing before she can deploy.

The slow process of bringing Zumwalt into service underscores the Navy’s struggle to develop new warships and helps to explain why, in 2020, the fleet’s most important warship still is a type that first entered service nearly 30 years ago.

Zumwalt delivered to the Navy in San Diego after the crew completed at-sea trials and activated the vessel’s combat system. “Delivery is an important milestone for the Navy, as DDG-1000 continues more advanced at-sea testing of the Zumwalt combat system,” Capt. Kevin Smith, the DDG-1000 program manager, said in a statement.

It took years for Zumwalt to get this point. The destroyer left the shipyard at Maine’s Bath Iron Works back in late 2016 and commissioned soon thereafter. Bath built two more ships in the class. Both should be in commission by the end of 2020.

Nearly four years later, the hull appears to work fine. But citing the high cost, the Navy has given up on developing rounds for Zumwalt’s guns.

The Navy in 2018 decided that instead of firing precision-guided shells long distances to bombard enemy beaches, Zumwalt and her sisters will pack anti-ship cruise missiles in their 80 launch cells and hunt enemy warships on the high sea.

But don’t expect the destroyers actually to perform that mission any time soon. Having delivered to the fleet, Zumwalt is slated to resume what Smith called “complex, multi-mission at-sea testing.”

Zumwalt for now is part of an experimental squadron whose main mission is working out tactics for blending manned and unmanned warships. The Navy expects to declare initial operating capability for the destroyer in late 2021, only after which she will be able to deploy on real-world missions.

The Navy at one time envisioned acquiring 32 Zumwalts. But as the cost and complexity rose, the Navy cut the class to just three. In place of the Zumwalts, the fleet restarted production of the Arleigh Burke-class destroyer.

A Burke at around 10,000 tons of displacement is smaller than a Zumwalt is. But a Burke is cheaper at just $2 billion per copy -- and with 96 launch cells it carries more missiles than a Zumwalt does. The lead vessel in the Burke class joined the fleet in 1991.

Today the Zumwalt class is no longer in production. But two shipyards including Bath are still churning out upgraded Burkes. And where Zumwalts are still stuck in testing, Burkes routinely deploy all over the world.