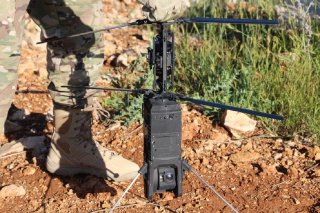 It hovers and looks like a black stick floating in the sky but can slam into an enemy at seventy kilometers an hour. The Firefly is Israel’s latest weapon to be acquired by the Israeli Ministry of Defense from Rafael Advanced Defense Systems. It will be deployed with infantry and is specially designed for soldiers fighting in urban areas, giving them the ability to fly a hovering missile around buildings to accurately take out terrorists or enemy forces.

The Firefly is a loitering munition, a kind of kamikaze drone but it is part of Rafael’s larger Spike family of missiles that have been deployed to thirty-three countries. The United States has used the Spike for its AH-64 Apaches. Spike missiles are more usually known for their ability to kill tanks, but the Firefly is a much smaller weapon that weighs only 3kg so it can be carried into battle by soldiers. Infantry have been increasingly deploying smaller drones in a surveillance role and also for attack, but the use of small drones that are man-packable is still in its infancy. Israel, which pioneered drones in the 1980s, is now seeking to pioneer the integration of loitering munitions for ground forces.

Firefly was jointly developed by Israel’s Ministry of Defense and Rafael, the latter of which is more well known for Israel’s Iron Dome and Trophy defense systems. The Firefly is an innovation that was developed to solve a problem Israel has faced in recent conflicts and one militaries have recently faced in places like Mosul and further afield. The issue is that ground forces in urban areas or fighting militants on their own turf tend to run into enemies who are dug-in or concealed, such as snipers, RPG teams or those operating IEDs. Having access to a small loitering munition that can conduct surveillance and attack gives soldiers another option to fight with.

The Firefly is operated with a tablet and unpacked from a tube. It is rugged and can return to the user with the click of a button. It also has an abort capability and its sensors enable it to fly without running into telephone wires or trees or other elements it might encounter. It has around fifteen minutes of flying time. Rafael sees it as a building block for future operations, such as deploying it with vehicles.

Gal Papier, Rafael’s director of business development for its tactical precision weapons directorate says that the idea for the weapon originated back in the 1967 war. During the battle for Jerusalem, Israeli soldiers had to assault Jordanian positions on a strategic hillside called Ammunition Hill. Numerous casualties resulted but Jacob Hetz, who won a medal for courage in the battle and later became an engineer at Rafael, sketched an idea for a hovering killer munition. For fifteen years Rafael and Israel’s ministry of defense plugged away to develop the weapon.

“This is innovative and new, it’s a missile that folds into a small cannister,” says Papier. He notes that ground forces have been acquiring commercial drones in the last years, such as quadcopters. But they are not armed and they are cumbersome to use. The Firefly is tailor-made for infantry and special forces. It can only fly 500 meters when not used line-of-sight, and its short endurance means the company made it easy to switch out the battery or even the warhead, giving it a purely surveillance side to it. The designers see it being used with a dedicated operator at the company or platoon level. It is expected to be rolled out in large quantities for Israeli forces. Israel’s army and Border Police are already deploying a large variety of drones, including some that can drop tear gas. The Firefly may play a role if Israel comes to blows with Hezbollah or Hamas in the next few years. With Iran tensions increasing daily in Syria, it could see action sooner than expected.