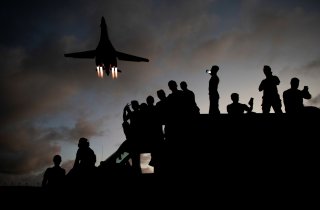 While the Northrop Grumman B-21 Raider long-range strike bomber (LRSB) is expected to eventually complement and then replace the Rockwell B-1 Lancer, Northrop Grumman B-2 Spirit and Boeing B-52 Stratofotress it could take a little while longer than initially expected. The advanced very long-range, heavy-payload stealth intercontinental strategic bomber was expected to take its first flight next year, but now it looks like it won’t head to the wild blue yonder until at least early 2022.

On Monday, 8th Air Force commander Maj. Gen. Mark Weatherington in a live stream with the Air Force Association’s Mitchell Institute confirmed that the first B-21won’t be ready to fly before 2022. The bomber, which is currently under construction, was previously expected to have its maiden flight next year.

When the aircraft does enter service with the United States Air Force it will bring a new dimension of stealth, attack possibilities and nuclear deterrence. It could even offer new tactical approaches to how modern operations move forward in the years ahead.

Digital mock-ups of the new bomber show that it superficially resembles the older B-2 Spirit stealth bomber as both airframes use a flying wing design to minimize their radar cross-section, and both appear to have their engines buried within their airframes to reduce thermal emissions. Moreover, neither plane has a tail assembly but stability during flight is actually controlled by an advanced digital fly-by-wire system.

Once the B-21 enters production it could significantly change the dynamic of the U.S. Air Force’s bomber fleet. As AeroTimes reported, that could allow the service to retire both the B-1 and B-2 bombers sooner, which could save on logistics and training.

The Eighth Air Force is currently responsible for the service’s bomber force as well as airborne nuclear command and control (C2) assets. According to Janes the Air Force currently has 157 bombers: 61 Rockwell B-1B Lancers, 76 Boeing B-52H Stratofortresses, and 20 Northrop Grumman B-2 Spirit strategic bombers. While the service has been modernizing the B-52H fleet with new engines, radars and communication systems to allow the Cold War bomber to fly to the 2040s, the service would like to retire the B-1Bs as soon as possible.

The Air Force had proposed in its fiscal year (FY) 2021 budget request to reduce the size of its bomber fleet from 157 aircraft to just 140 by retiring 17 of the Rockwell B-1B Lancers. The Air Force’s senior leadership has also looked to expand upon previously announced plans, which called for 80 to 100 of the B-21s and potentially increase that number. Ret. Lt. Gen. David Deptula, Dean of the Mitchell Institute for Aerospace Studies, even suggested that it would be likely for the Air Force to have a fleet of 180 of the advanced bombers.

However, given that the B-21 won’t likely take its first flight until 2022, it could still be a decade or longer before the B-1B, B-2 or the B-52s disappear from American skies.