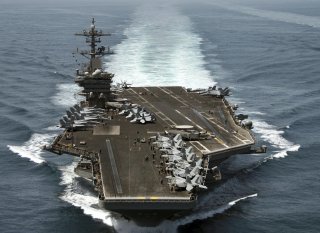 Conceived over 100 years ago starting with Britain’s HMS Hermes, the dedicated aircraft carrier is a feat of modern naval engineering. Building one is a massive technical and financial undertaking that tests a shipbuilding industry’s competence across multiple levels of expertise. But design and construction are only half the struggle; once built, these hulking behemoths must be properly manned and maintained. Given the scope of the challenges at hand, the past century of aircraft carrier production has unsurprisingly spawned its fair share of failures.

Here are five of the worst carriers ever to set sail:

Russia’s Navy inherited its only aircraft carrier, Admiral Kuznetsov, in the early 1990’s from its Soviet predecessor. Arguably the worst carrier in service today, the decrepit Kuznestov has hobbled from disaster to disaster in recent decades. Belching black fumes and crashing multiple fighters over the course of its lackluster participation in Russia’s 2016 Syrian campaign, Kuznetsov was taken out of commission in late 2017 when a seventy-ton crane smashed through the vessel’s hull and caused its drydock to sink. In late 2019, Admiral Kuznetsov caught fire during routine welding work. The incident caused around one billion dollars’ worth of damage, killing two personnel and injuring over a dozen more. Despite these setbacks, Kuznetsov is slated to re-enter service in 2023.

Thailand’s first and only aircraft carrier, the HTMS Chakri Naruebet was built by Spain’s Bazan shipyards and commissioned by the Royal Thai Navy in March 1977. A light carrier designed to operate a mix attack helicopters and Harrier vertical/short takeoff and landing (V/STOL) aircraft, the Chakri Naruebet was deployed on a series of disaster relief operations in the 2000’s. But the Naruebet has languished in the midst of constant budget shortfalls, to the point of becoming little more than an expensive placeholder in the Thai Navy. According to recent reports, the carrier goes out to sea on routine training missions no more than once per month.

The U.S. Navy’s first purpose-built aircraft carrier, Ranger, suffered from a host of suboptimal construction decisions. Relatively small, light on armaments, and lacking in protection, the Ranger was deemed unsuitable as a fleet carrier for Pacific theater operations against the Japanese Imperial Navy. She was instead dispatched to the Atlantic for less intense wartime missions and, in 1944, relegated to training duties.

The Chinese Type 001 aircraft carrier Lioaning is based on the hulk of an unfinished Kuznetsov-class carrier that China procured from Ukraine (under dubious circumstances involving deceptive promises of the vessel being used as a floating casino) in 1998. Boasting rapidly outdated components and prone to power failures, the increasingly obsolescent Lioaning has been largely relegated to training tasks in the 2010’s. The carrier reportedly underwent a refit in recent years, but the extent of those alleged improvements and repairs remains unclear.

Many of these first aircraft carriers were battleship and battlecruiser conversions— the Imperial Japanese Navy’s Shinano illustrates the perils of this approach. The third of the Yamato-class battleships, Shinano fell prey to conflicting visions: one faction within the imperial top brass wanted the Shinano repurposed as a dedicated aircraft carrier, while others envisioned its new role more as a heavily armored support ship that’s also capable of carrying dozens of fighters. The latter approach won out, dooming the Shinamo to a service life of operational irrelevance. The Shinano’s tenure in the Japanese Navy ended before it began, as the carrier was sunk by the Balao-class submarine USS Archerfish on November 29, 1944, less than two weeks into its sea trials.