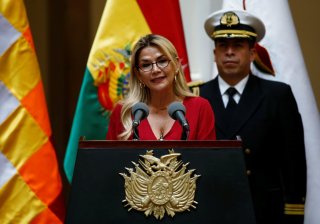 Jeanine Anez, Bolivia’s president from 2019 until 2020, was sentenced on Friday to ten years’ imprisonment for her role in the controversial resignation and exile of her predecessor in office, longtime Bolivian socialist leader Evo Morales—a decision that many of the former president’s supporters allege took place during a coup d’etat led by Anez and Bolivia’s right-wing faction.

Anez, who had been in pre-trial detention since March 2021, was ordered by the First Sentencing Court of La Paz to serve her sentence in a women’s prison near the capital city. Anez and her lawyers have consistently denied the charges against her and alleged that they were politically motivated as revenge for Morales’ ouster by her successor, Luis Arce, a member of Morales’ Movement for Socialism (MAS) party. However, the court claimed that her actions in the run-up to Morales’ departure from office were “contrary to the Constitution” and represented a “breach of [her] duties” as vice president of the Bolivian senate in 2019. Although Bolivian prosecutors had requested a fifteen-year jail sentence, several outstanding charges against the former president, including an alleged case of sedition, could lengthen her prison term if she is convicted in another trial.

The political crisis that unexpectedly elevated Anez to Bolivia’s presidency began during the country’s October 2019 presidential election, which officially elevated Morales to a fourth term in office. However, two subsequent audits published by observers from the European Union (EU) and the Organization of American States (OAS) alleged that massive voter fraud had occurred, leading to widespread protests and demands that Morales leave office. After initially agreeing to annul the election and repeat it, Morales resigned the presidency on November 10 and went into exile in Mexico after losing the support of the country’s military. Other members of the MAS party also resigned and fled, leading Anez, the highest remaining official, first in the line of succession for the presidency.

Although Anez initially pledged that she had sought only to hold the presidency in an interim capacity, she attempted to run for re-election the following year, coming in a distant fourth behind Arce, a protege of Morales, and two other opposition lawmakers.

During his fourteen-year tenure in office from 2006 until 2019, Morales achieved popularity within Bolivia for establishing a robust social safety net and defending the interests of the country’s indigenous population. However, he faced criticism for weakening the country’s democratic institutions, including through a controversial constitutional change—approved by the country’s Supreme Court after most Bolivians voted against it in a referendum—that eliminated term limits for the presidency.