France: The Forgotten Nuclear Power That Could Kill Billions of People 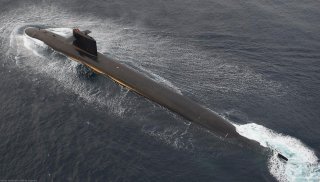 Unlike the United States or Russia, who maintain a nuclear triad of land-based, submarine-launched, and air-launched missiles, France has a dyad of submarines that can launch nuclear ballistic missiles and a stockpile of air-launched nuclear cruise missiles.

The M51 is the heart of French nuclear deterrence at sea. Each missile has six to ten Multiple Independent Reentry Vehicles (MIRVs), and each of those MIRVs is guessed to be in the 75 to 110 kiloton range.

Its range is estimated at 8,000 kilometers, or just under 5,000 miles and the missiles are launched from the nuclear-powered Triumphant-class submarines.

The Air-Sol Moyenne Portée is the air-launched component of French strategic deterrence. The missiles play a unique role in French deterrence, where their use would be considered a warning shot of sorts before the more widespread use of nuclear weapons would be used in a conflict.

It uses a high-speed ramjet engine design and replaced earlier French free-falling nuclear bombs. According to CSIS, the missiles “accelerates to Mach 2.0 in five seconds, after which the booster cartridge is ejected from the ramjet exhaust nozzle. Then, the liquid (kerosene) – powered ramjet motor takes over and accelerates to a maximum speed of Mach 3.” Though not supersonic (Mach 5+), these speeds are nonetheless quite fast. CSIS estimates that only 40 to 50 missiles were ever produced.

The Hadès missile system was at one point a land-based component of French strategic deterrence — though only at the tactical, not strategic level, due to the system’s relatively short 480 kilometer, or about 300 mile range.

The Hadès was created in 1975 as a road-mobile option to defend the borders of France in case of an invasion by the Soviet Union. Part of what doomed the program was the missile’s range, which would have put East Germany squarely in Hadès’ crosshairs.

After the reunification of Germany in 1990, it became politically untenable to maintain a stockpile of tactical nuclear weapons that could reach only as far as Germany, and the missiles and launchers were subsequently dismantled in the mid-1990s.

French nuclear deterrence is marked by a distinctly independent streak. France left the North Atlantic Treaty Organization in 1966, and returned only fairly recently, in 2009. One of the issues was French reluctance to place their strategic nuclear arsenal under the umbrella of NATO.

France is one of the world’s preeminent missile powers — in addition to a wide array of conventional and nuclear missiles, France is also a permanent member of the United Nation’s security council. There is indeed an aura of exclusivity in being one of the world’s few nuclear powers — an aura made even more exclusive by leaving the world’s largest military alliance.

Thankfully, France is no longer going it alone.