The Future of the U.S. Marine Corps: Narcosubmarines 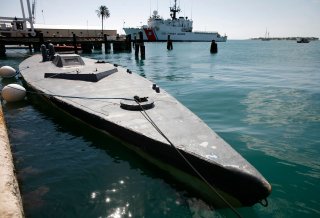 The Marine Corps is changing. In a future high-end fight in the Pacific, teams of Marines could be flung far and wide throughout the Pacific operating relatively autonomously. These groups of Marines, stationed on islands or small boats hundreds or even thousands of miles away from Navy ships and deep in enemy territory would have to battle not only the enemy, but also the tyranny of distance and keep themselves supplied. But how?

One unlikely source of inspiration: narcotrafficers.

This was the advice of three officers in a piece recently published in the foreign policy and commentary website War on the Rocks. In the piece, the three officers argue that in order to keep groups of scattered Marines supplied with food, fuel, and ammunition, the Corp needs to ditch ships and aircraft and try to “mimic drug traffickers.”

They argue that a vessel optimized for long-range transport of illicit substances could easily be adapted into an unmanned system for transporting tons of critical supplies for the Marine Corps.

The authors also suggested that the Navy’s current fleet of shipping vessels are dangerously exposed when close to shore, especially in hotly contested environments. They are “too few, too visible, and therefore too vulnerable.”

The authors cite the Drug Enforcement Administration, which says that about a third of the U.S.-bound cocaine travels on semi-submersibles designed and built in remote jungle locations. The homemade vessels are quite adept at staying hidden too.

The authors envision something that combines both the semi-submersible narcosubmarine’s wave-piercing bow with a Higgins Boat-style offloading ramp for quick and easy cargo unloading into one low cost, nearly-expendable platform.

Admittedly, a narcosubmarine-like low-profile vessel would not fulfill all of the Marine Corps’ logistical needs in the Western Pacific and are limited by their modest payload when compared to other naval supply ships. Still, they would be a cheap, low-risk solution that could easily be put into mass production and would be the “very epitome of the Marine Corps commandant’s “low signature, affordable, and risk-worthy platforms.”