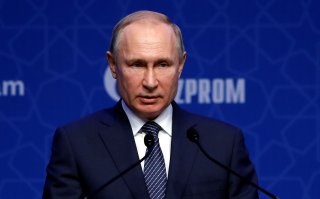 The Group of Seven (G7) nations—which includes Canada, France, Germany, Italy, Japan, the United Kingdom, and the United States—may have to prepare for a complete shutdown of Russian gas pipelines to Europe in the coming weeks, according to a CNBC report.

Considering that Russia has long been a major supplier of gas to Europe, providing 40 percent of the gas consumed in the European Union last year, such a shutdown could have severe consequences for Europe’s economy.

Over the past few weeks, Gazprom, Russia’s state-backed energy supplier, has reduced its gas flow to the continent by roughly 60 percent, prompting Germany, Italy, Austria, and the Netherlands to all suggest that they could revert to using coal once again.

“The G-7 have to prepare for a shutdown of gas. The G-7 can deal with a cutback on oil. There are other supplies that could be gotten around the world, but the gas could be shut off and that would have consequences,” Jeffrey Schott, a senior fellow at the Peterson Institute for International Economics, told CNBC on Monday.

“Russia already has cut back substantially on gas flowing to Germany and through Ukraine, so shutting down the pipelines is not inconceivable. Russia also sells some LNG to Europe but not that much,” he noted in an email after the interview.

Meanwhile, according to the Hill, the G7 nations are busy endorsing investments in natural gas in an effort to reduce their dependence on Russian fuels. In a communique released on Tuesday, the group supported increased deliveries of natural gas.

“In this context and with a view to accelerating the phase out of our dependency on Russian energy, we stress the important role increased deliveries of [liquified natural gas] can play, and acknowledge that investment in this sector is necessary in response to the current crisis,” their statement read.

G7 leaders added that in some cases, government investment in the gas sector can be “appropriate as a temporary response.”

Furthermore, in a move to block Russia from getting its hands on revenue it needs to fund the ongoing war against Ukraine, the G7 is expected to impose a ban on Russian gold imports, which are worth about $15 billion a year.

“The action taken to stop buying Russian gold is one small step in the right direction,” Schott said.