Game It Out: Navy Adapts to the Emerging Threat of Climate Change 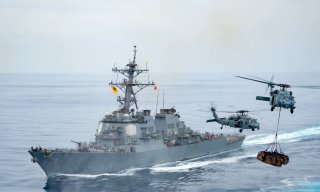 The Department of the Navy recently concluded a unique “Climate Tabletop Exercise” at the Marine Corps Barracks in Washington. The purpose was to take a closer look at the effect of climate on American naval operations and how a changing climate could adversely affect the Navy’s warfighting ability.

“As the Secretary of the Navy, the Commandant of the Marine Corps and the Chief of Naval Operations have said, we are looking at the impacts of climate change because it makes us better warfighters,” said Meredith Berger, assistant secretary of the Navy for energy, installations, and environment, in a U.S. Navy statement covering the tabletop exercise. “The Navy and Marine Corps must address climate change in our readiness and operations in order to maintain every advantage to fight and win,” she continued.

Set in October 2030, the game “focused on a Navy Amphibious Ready Group and an embarked Marine Expeditionary Group preparing for an amphibious exercise with a partner nation in the Western Indo-Pacific AOR,” the Navy explained.

The first roadblock in the wargame was adverse weather. “A typhoon impacts the exercise, and quickly creates cascading effects on operations,” the Navy explained. “The storm came on the heels of other destructive storms which made the land and local population less resilient and more susceptible to stronger damage from ensuing mudslides, electric grid, and other key infrastructure disruptions,” Navy officials added.

Several important takeaways from the exercise highlighted the importance of accounting for the challenges of a changing climate. “The group talked about the importance of logistics, both as a warfighting enabler, resilience vulnerability, and an area where the Department can make strides to become more energy-efficient and therefore a more capable fighting force,” the Navy’s statement noted.

Additionally, “the group discussed identifying single points of failure which may be undermined climate impacts and the need for redundancy as well as efficiency. The importance of collaborative planning in order to develop resilient partnerships in the face of a dynamic and evolving climate environment were also discussed.”

While the eyes of the world are currently on the conflict in Ukraine and developments in Europe, other future threats are becoming predominant for the U.S. Navy. The Navy is particularly focused on the threat of China and how climate change will affect operations in the Indo-Pacific.

“In order to strengthen and maintain our maritime dominance, we need to strengthen and maintain our maritime partnerships,” Berger said. “Partnership is a key driver of success and diversity of perspective is the enabler. Today we had the chance to work with a variety of partners to gain their perspectives and share ours so that we can better tackle the climate crisis together,” she added.