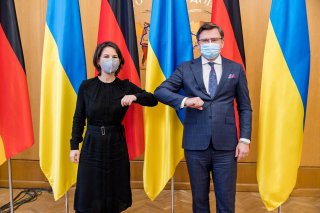 German Foreign Minister Annalena Baerbock said on Monday that Russia would pay a “high price” if it attempted to intervene in Ukraine, although she claimed she hoped that further negotiations could resolve the crisis.

“Each further aggressive act” would bear economic, strategic, and political costs for Russia, she said during a visit to Kiev.

“Diplomacy is the only way,” she added.

Baerbock’s statement follows similar assurances made by other Western leaders as Russia has escalated its troop presence along the Ukrainian border in recent months. Although the Kremlin has said that it is not planning to invade Ukraine, Russian leaders have vociferously objected to NATO support for Ukraine and its hints that it might accept the country into the military alliance in the future, potentially opening a pathway for the deployment of missiles there.

Negotiations between Russia and the West have failed to end the crisis, as Moscow has requested a concrete end to NATO’s eastward expansion and an end to training exercises conducted in the alliance’s easternmost areas. NATO officials have declined both requests, emphasizing that no country has a veto over the alliance’s admissions process.

Meanwhile, tensions have increased in other areas. A Russian-linked firm is suspected of having participated in the January 14 cyberattack that briefly shut down more than a dozen Ukrainian government websites.

Baerbock was speaking alongside Ukrainian foreign minister Dmytro Kuleba in Kiev. The two officials affirmed that Ukraine and Germany wished to continue negotiations toward ending the war in eastern Ukraine between the central government in Kiev and Russian-backed separatists in the Donbass region. Both foreign ministers reaffirmed support for the “Normandy Format” diplomatic talks that include Germany, France, Ukraine, and Russia.

Kuleba also insisted that no decision could be made about the status of Ukraine without Ukrainian participation – a notion that Germany has supported.

“It is important to us now that neither Berlin nor Paris makes any decision about Ukraine without Ukraine, and does not play any game behind our backs in relations with Russia,” the Ukrainian foreign minister said.

“For this, I want to thank Annalena for taking such a principled position.”

Although Germany has largely supported Ukraine since 2014, tensions have grown between the two nations in recent months as German regulatory authorities prepare to approve the Nord Stream 2 pipeline. The pipeline would ship Russian gas directly to Germany without transit through Eastern European countries including Ukraine. Baerbock indicated in her remarks that the pipeline was on hold, although it is unclear whether it will remain on hold as gas prices in Europe continue to rise.