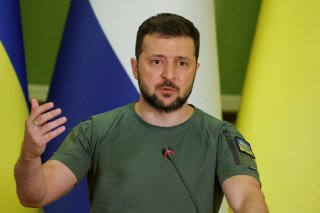 Rep. Victoria Spartz (R-IN) has accused Ukrainian president Volodymyr Zelenskyy’s Chief of Staff Andriy Yermak of ties to Russia. “Based on a variety of intelligence, actions taken by Mr. Yermak in Ukraine and his alleged dealings in connection with Russia, Congress needs to obtain this information urgently to confirm or deny various serious allegations. Considering our material involvement in this conflict, we owe this level of rigor and accountability to the American people as Ukraine urgently needs increased levels and speed of security assistance, which unfortunately have not been prioritized by the Biden Administration,” Spartz said in a statement detailing her letter to President Joe Biden. Spartz added that Oleg Tatarov, a senior official appointed by Yermak, delayed “the appointment of an independent anti-corruption prosecutor for over a year, rendering the Specialized Anti-Corruption Prosecutor’s Office and the National Anti-Corruption Bureau (NABU) dysfunctional.”

Kyiv has lashed out at Spartz’s accusations. “Ukraine is deeply grateful to the United States of America for their unwavering support in the fight against Russia’s aggression,” wrote Ukrainian Foreign Ministry spokesperson Oleg Nikolenko, according to The Hill. “On this background of extensive support especially contrasts the recent actions and statements of US Congresswoman Victoria Spartz. They are an undisclosed attempt to bring back into American politics classic narratives of Russian propaganda about Ukraine’s leadership’s seemingly ties to Russia and to drag our state into US domestic politics.”

Spartz has framed her row with Yermak as a question of oversight. “I encourage the Ministry to consider my statement with the kind of seriousness these questions about Mr. Yermak demand, instead of launching ad hominem attacks as they have thus far. Ukrainians and Americans will be better served by our governments responding with due diligence – not defensive platitudes,” she said in a statement.

Spartz has accused Yermak of leaking information to Belarus—a close Russian military ally—on Ukraine’s operations against the Russian mercenary “Wagner Group,” mismanaging diplomatic talks with Russia, “sabotaging” Ukrainian efforts to defend the southern city of Kherson, and “demanding unreasonable or even illegal terms” over the “purchase of urgent military equipment through the Ukrainian Ministry of Defense.”

Marcy Kaptur (D-OH), co-chair of the Congressional Ukraine Caucus, called Spartz’s position reckless and suggested that her accusations against Yermak were playing into Moscow’s hands. “Those who are spreading wild narratives aimed at undermining Ukrainian officials during the war are recklessly providing aid to Putin and his propagandists. The United States is committed to Ukraine’s victory, and the Ukrainian people have no greater friend than the United States,” she said in a statement, adding that there is “no reason to doubt the loyalty of any official” in the Zelenskyy administration.