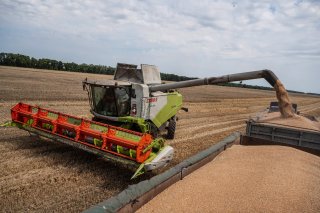 Ukraine said it expects five ships to arrive at its Chernomorsk Black Sea port on Wednesday to be loaded with more than 70,000 tons of agricultural products, the biggest convoy yet under the United Nations-brokered grain deal.

According to Reuters, Ukrainian port officials said the shipment would include wheat, corn, and sunseed oil. Twenty-four ships have left Ukrainian ports under the new grain deal, signed by Russia, Ukraine, Turkey, and the UN in late July. The agreement establishes a Joint Coordination Center (JSC) in Istanbul, staffed by Russian, Turkish, and Ukrainian representatives, to oversee shipments of agricultural products out of three Ukrainian Black Sea port cities. As part of a compromise arrangement to allay Russian concerns over weapons smuggling, ships leaving Ukraine are subject to inspection by Turkish officials.

During negotiations, Moscow demanded reassurances from the United States and EU that Russian food and fertilizer products are fully exempt from the Western sanctions regime. Washington and Brussels have issued statements to that effect, but Russia’s agriculture industry is still reportedly facing challenges stemming from secondary sanctions on farming equipment.

Though the deal is being fully enforced without any external interference by Russia, Ukraine’s grain exports have slumped in the past several months. Ukraine exported 1.88 million tons of grain in the first fifteen days of August 2021, but only 948,000 tons in the first half of August 2022, as per Reuters. The first cargo ship to depart Ukraine under the new deal, Razoni, was rejected by a Lebanese buyer earlier in August. "According to the information provided by the shipper of the Ukrainian grain aboard the Razoni, the buyer in Lebanon refused to accept the cargo due to delays in delivery terms," the embassy of Ukraine said in a Facebook post. Local sources said the grain, which presumably sat in a ship for as long as five months, was rejected over quality concerns. It is unclear how widespread such rejections have been and how deeply they have cut into Ukraine’s bottom line. Satellite images taken in recent days reportedly appeared to show the Razoni docked in Syria’s port city of Tartus. There have been unconfirmed reports that at least part of the Razoni’s corn cargo is being unloaded in Syria. Both the JSC and Ukrainian authorities said they are no longer responsible for the vessel and its contents. “After outbound vessels clear inspection in Istanbul, the JCC ceases monitoring them,” the Coordination Center stated. “The cleared vessels proceed then to their final destinations, whatever those may be.”