HMS Queen Elizabeth to Tour With U.S. and European Navies 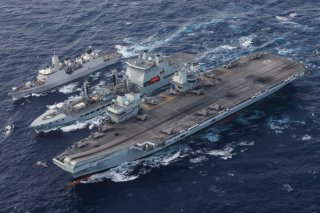 Great Britain’s flagship, HMS Queen Elizabeth, is heading across the Atlantic to the United States for exercises with the U.S. Navy, followed by further drills in Europe with other European navies. Though the Royal Navy’s presence in both American and European was long planned, the HMS Queen Elizabeth takes the place of the HMS Prince of Wales, another British aircraft carrier.

In a statement, the Royal Navy explained that “in the coming months, HMS Queen Elizabeth will be at the heart of a powerful task group made up of thousands of sailors, up to ten ships, F-35B Lightning jets, helicopter squadrons and Royal Marines Commandos which will operate across Europe this autumn.”

The statement noted that “the aircraft carrier will first deploy to the east coast of the United States to undertake parts of HMS Prince of Wales’ deployment – as her sister ship undergoes repairs.”

HMS Queen Elizabeth’s Commanding Officer, Capt. Ian Feasey, said: “After a period of maintenance it is fantastic for the Fleet Flagship to be underway again to conduct operational activity with allies and partners.”

“The Royal Navy task force will work closely with allies and partners across Europe – from the Baltic all the way south to the Balkans and Black Sea region – over the coming months,” the Royal Navy said. “The operations are part of galvanised NATO efforts in the face of Russia’s unprovoked invasion of Ukraine to safeguard security, stability and prosperity across Europe.”

It added that the “HMS Queen Elizabeth will primarily be focused on operations in the Baltic and work closely with forces from Denmark, Estonia, Finland, Iceland, Latvia, Lithuania, the Netherlands, Norway and Sweden. Together, these nations form the UK-led Joint Expeditionary Force, which is designed to react to crises whenever and wherever they unfold.”

Despite the ability to substitute the HMS Queen Elizabeth for her sister ship, the HMS Prince of Wales’ breakdown is highly concerning—especially for such a new ship.