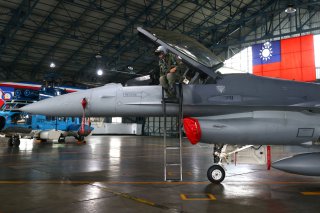 In an air demonstration on Wednesday, Taiwan’s air force conducted an exercise with the AT-5 Brave Eagle, a new fighter jet intended to phase out several older American planes, which it boasted had been designed and manufactured on the island by the Taiwanese defense sector. The demonstration, held at Taiwan’s Chihhang Air Base near the eastern city of Taitung, featured three Brave Eagles, according to Reuters.

Although Taiwan continues to import most of its military equipment from the United States, it has attempted to jump-start a domestic defense industry in recent years, particularly under the leadership of the ruling Democratic Progressive Party and current President Tsai Ing-wen. Taiwan’s defense-spending boom, including the Brave Eagle program, came partially as a response to increased military activity from mainland China, which has threatened to cross the Taiwan Strait and occupy the island since its foundation in 1949 and has conducted increasingly frequent flights into Taiwan’s air defense identification zone, or ADIZ, since the onset of the pandemic.

The Brave Eagle program, overseen by Taiwan’s state-run Aerospace Industrial Development Corporation, cost roughly $2.3 billion and is scheduled to deliver sixty-six AT-5 aircraft by 2026. The jet, first flown in 2020, is Taiwan’s first domestically-made aircraft since the Ching-kuo Indigenous Defense Fighter, or IDF, first produced in the late 1980s and introduced into the Taiwanese Air Force in 1992. The two jets have similar capabilities, including short takeoff and landing—a vital consideration within Taiwan, which has prepared to use highways as impromptu runways in case of attack from mainland China.

Although the three planes were intended as trainer aircraft and were not equipped with weapons, Taiwanese officers indicated that they could be in the future. The planes are intended to fulfill an air support function in the event of a military conflict.

The Brave Eagle program was established to replace Taiwan’s aging Northrop F-5 fighters, which Taiwan has owned since the early 1970s, as well as its domestically-manufactured AIDC AT-3, which first entered service in 1984. Both planes are primarily intended as training aircraft today, but they have been plagued by mechanical failures. Three Taiwanese F-5s have crashed since 2020, and at least four AT-3s have been lost over the past decade—most recently in May, when one of the aircraft crashed outside the southern city of Kaohisung shortly after takeoff.