China Floods the Skies Near Taiwan With Dozens of Planes 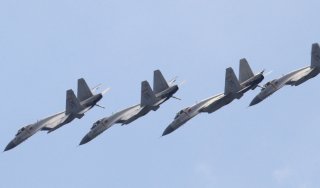 The Chinese aircraft participating in the incident included seventeen fighters and six Xian H-6 bombers, as well as several other specialized aircraft, according to Taiwan’s defense ministry. In response to the incursion, Taiwan sent several of its own aircraft to warn the planes and activated its land-based missile defense systems.

The Chinese planes passed through the southwestern corner of the ADIZ, close to Pratas Island, which Taiwan controls. The planes went on to cross into the Bashi Channel, which separates Taiwan from the northern Philippines, before returning to the mainland.

Taiwan’s ADIZ is legally distinct from its airspace, over which the island claims sovereignty and has greater latitude to interfere with straying aircraft. In an ADIZ, a country can request that entering planes identify themselves, but it has no legal authority to attempt to ground them or to warn them away.

The Taiwanese government has described China’s repeated missions into its ADIZ as “gray zone” operations, intended to test the timing of Taiwan’s responses rather than engage in combat. Beijing has emphasized that its operations are consistent with international law and are intended to protect Chinese sovereignty.

Beijing has never recognized Taipei’s de facto independence and remains committed to uniting the island with mainland China. Successive Chinese leaders have emphasized that a China-Taiwan unification should happen peacefully but have refused to rule out the possibility of military conflict and have trained the People’s Liberation Army (PLA) accordingly. Last week, Beijing unveiled its third aircraft carrier, the Fujian, named after the Chinese province located across from Taiwan.

The United States has long cautioned Beijing against attempting to invade Taiwan but has not formally committed to defending the island, although President Joe Biden appeared to have done so earlier in the year by publicly declaring that the United States would aid Taiwan if it were attacked.