How the Army's Precision Guided Missiles Will 'Outrange' the Enemy 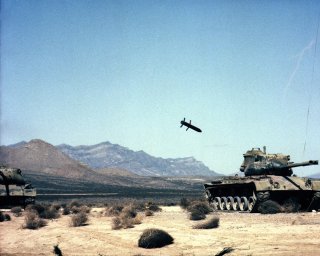 The Army will once again shoot off its emerging Precision Strike Missile, a new 500-kilometer weapon slated to burst onto the operational scene in coming years. It brings an unprecedented blend of attack range, high-tech precision guidance technology, transportability, and speed to modern ground war.

The upcoming launch, slated for May 12 at White Sands Missile Range, N.M., will be just the latest in a series of successful firings of the PrSM missile, a weapon intended to replace and improve upon the existing Army Tactical Missile System land-fired missile.

“The current missiles can go about 350 kilometers, and this will go beyond 500 kilometers, eventually. We are almost doubling the range with existing launchers, so we are not having to invest in new launchers. We can now put two missiles in the launcher as opposed to what we can do now, which is one,” Gen. John Murray, Commander, Army Futures Command, told The National Interest in an interview about the weapon last year.

Murray described the Lockheed-built weapon as the Army’s post-INF (Intermediate-Range Nuclear Forces) solution, meaning the service’s need to engineer medium-range missiles in response to Russia’s violation of the well-known previous treaty limiting testing and development of those kinds of weapons. Medium-range land-fired missiles enable Russia to hold NATO countries in Europe at risk, given that they operate at ranges of 500 kilometers or more. The Army’s new land missile's ability to travel those distances is, quite simply, intended to “outrange” the enemy. As Army weapons developers explain it, it is an ability to hold an approaching force at risk while being at lower risk of an enemy strike or counterattack.

While the weapon clearly has surface-to-surface applications for enemy targets such as air defenses, troop fortifications, and armored vehicle columns, the PrSM is configured with an advanced targeting multi-mode seeker engineered to bring new dimensions of targeting flexibility, to include maritime attack. Particularly if enabled by newer kinds of precision-guidance technology, there certainly seems to be no reason why a ground-fired weapon such as this couldn’t be used to attack enemy ships or even submarines close to the surface. Any kind of multi-domain connectivity or coordinated attack seems to be something that provides some of the overall inspiration for the weapon as it could be used in coordination with air assets to destroy enemy air defenses or soften coastal defenses in preparation for an amphibious attack. Perhaps also, given that the PrSM is mobile and transportable, the new missile could be used on island outposts to strike or destroy enemy Navy targets from an advantageous position?

Earlier in the development of PrSM, this new targeting seeker completed a “captive carry” test wherein it flew onboard an aircraft against “representative targets” in preparation for further testing and ultimate deployment.

While no information regarding the exact technologies of the seeker is available, multi-mode seekers on other weapons often blend various targeting technologies into a single application, often merging things like radio frequency guidance, laser spotting, or infrared sensing.

“The first test was successful. Essentially, it gives us a bunch more sensors so we are connected to the air defense network which has a variety of very powerful, long-range sensors. We can acquire and attack more targets at longer range,” Brig. Gen. John Rafferty, Director, Long-Range Precision Fires Cross-Functional Team, told The National Interest following the captive carry test.

The thrust of the new seeker, it seems apparent, is in part grounded in a concept of networking, as Rafferty seemed to indicate it might enable more multi-domain targeting. Receiving targeting input from drones, aircraft, forward-positioned controllers or even ocean assets adds an entirely new attack scope to the weapon.

"Long-range fires can suppress and neutralize enemy integrated air defenses and enable combined arms maneuver. Combined Arms allow us to close with and destroy an enemy. It requires armor, infantry, and combat aviation to work together in a synchronized fashion. If we lose this synchronization we are far less lethal. If an enemy has range, he can separate the combined arms team. Our adversaries have watched us and learned how we fight. They have invested in areas to offset our advantage,” Rafferty told The National Interest.