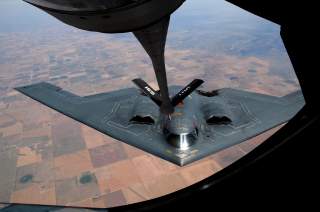 The B-2’s ability to deliver such devastating weapons deep within the most well defended airspace makes it a premium, highly specialized war machine without equivalent—at least unless China’ develops a decent H-20 stealth bomber. So far, B-2s have mostly leveraged their range and payload rather than stealth for actual combat operations. Hopefully, the Spirit’s awesome firepower and low-observable characteristics will never be tested in the kinds of high intensity (and likely nuclear) great-power conflict it was designed to fight.