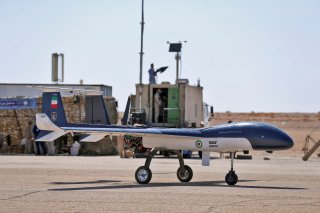 The first sign that Russia was using Iranian-made drones in Ukraine emerged this September. Ukrainian soldiers reported that a Shahed-136 “suicide drone” was employed for the first time to target military positions in an area recently recaptured from Russia near the northeastern city of Kupyansk. Weeks later, Russia used those drones to carry out several waves of attacks against Ukrainian cities, including Kyiv, materializing fears that Iran’s drones were on their way to Russia for use in the war.

The use of Iranian-made drones against a European capital came as a shock to the West, but it is the direct consequence of a lenient approach to Iran’s drone and ballistic missile programs, both of which have been honed through years of attacks, particularly in Yemen. By targeting countries throughout the Gulf, the Houthis, Iran’s local proxy in Yemen, have provided the Islamic Republic with a battlefield to test new weapons against relatively sophisticated air defenses. Now, those same weapons are being used to hammer the Ukrainian homefront, thousands of kilometers away from Iran and Yemen.

The crisis in Yemen is a forgotten conflict that rarely makes the headlines. With the help of Iran, the Houthis, a little-known Yemeni minority, have gradually taken control of most of the northwestern (and most populous) areas of Yemen. The group’s position close to the border with Saudi Arabia certainly played a key role in Iran’s decision to support the group, but the Houthis have also provided Iran with another valuable “return on investment” and have proven increasingly essential for Iran by providing combat-tested data and information on what has become the core of Iran’s military doctrine: its drone and ballistic programs.

Years ago, the Yemen-based group had little to no knowledge of the use of suicide drones or missiles. The Houthis’ first attempts to use such tools were crude and inefficient. The group initially used reconverted air defense missiles and local (mostly Soviet-made) ballistic missiles to try to hit southern Saudi Arabia. But, with the help of Iran, the Houthis’ arsenal rapidly grew from unguided rockets to cruise missiles and drones.

The first use of Iranian-made/designed drones by the Houthis can be traced back to late 2016, when they used the Qasef-1 suicide drone (or loitering munition) to target Saudi Arabia. Since then, the group has expanded this line of drones, based upon Iranian-made designs and lessons learned during previous attacks, to increase both the range and accuracy of those drones. New lines of drones, including the Sammad 1, 2 and 3, were also launched.

This includes the Shahed-136 drones, which may have seen their first operational use in the 2019 attack against two Saudi energy facilities. In the aftermath of this unprecedented attack against Saudi energy infrastructure, which is suspected of having been launched directly by Iran, debris from a “delta-winged” drone was found. Fast forward to this year, and the Houthis have made little effort to hide that they are indeed in possession of the same drone that has been hammering Ukrainian cities, showcasing it during a parade in the port city of Hudaydah.

By nature, such drones are almost exclusively used against civilian targets. They are guided through GPS coordinates and, as a result, can only be expected to accurately hit immobile targets. While the Houthis have attempted to use the drones against several military bases in southern Saudi Arabia, those military assets are generally better defended than “softer” civilian targets, including infrastructure and cities. The goal of these attacks is not to hit the enemy’s military capabilities but to reduce its will to fight: to bring the war where it shouldn’t be, namely among civilians, in the same way that terrorist attacks degrade morale.

In other words, the strategy used by Russia to strike the Ukrainian electricity grid—a strategy that is meant to freeze the Ukrainians to death during the coming winter—was largely developed in Yemen.

As the conflict in Yemen festered, Iran was also able to acquire valuable information on how to efficiently bypass modern air defenses. Alongside the group’s drone program, the Houthis also benefited from Iranian expertise with both ballistic and cruise missiles, developing weapons that have seen most of their operational use in or from Yemen. Iran and its proxies have tested several strategies to bypass multi-layered defenses, with the most efficient being the use of combined attacks that include ballistic and cruise missiles as well as drones.

By doing so, and employing a high number of projectiles with a variety of flight paths, the Houthis—and any other users, including Russia—can hope to overwhelm the enemy’s air defenses and punch a whole through even a sophisticated network that would be capable of dealing with one of those three threats. This strategy was refined and used by the Houthis to accurately target Saudi Arabia this year and carry out their first attack against Abu Dhabi. With reports that Iran may soon be providing ballistic and cruise missiles to Russia, we can expect that Moscow will try to replicate this strategy on a far larger scale.

It may come as a surprise that lessons drawn from a conflict thousands of kilometers away from Europe have had a direct impact on one of the largest wars the continent has seen since World War II. But the truth is that leniency towards the Houthis and Iran’s drone and missile programs has a cost. When a conflict of global proportion breaks out, such as the Russian invasion of Ukraine, threads are tied between previously unconnected crises and the cost of past mistakes increases.

The lack of coverage of the conflict in Yemen—as well as partisanship on the topic in the United States with an accompanying fixation on Saudi Arabia—is partly to blame for the relatively tepid Western response to the increased sophistication of drones and missiles used by the Houthis. The decision to lift the Houthi’s designation as a Foreign Terrorist Organization (FTO), too, was clearly a move in the wrong direction. The group needs to be pressured and sanctioned for the sake of Yemenis, who were robbed of a chance for peace this year after the group refused to extend a much-needed ceasefire, but also because the group has proven to be a key provider of feedback for Iran’s dangerous missile and drone programs. And these weapons are now being used to deadly effect in Europe.

Michael Horowitz is a geopolitical analyst, and the head of the intelligence branch at Le Beck International, a geopolitical and security consultancy based in the Gulf. He has written extensively about the Middle East as well as the Russian invasion of Ukraine. Michael can also be found on Twitter and in multiple international outlets where he has regularly been quoted.