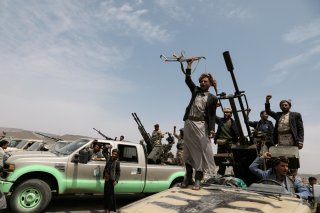 Brig. Gen. Turki al-Maliki, a spokesman for the Saudi-led military coalition fighting in Yemen, announced on Thursday that the coalition would release 163 prisoners who had been captured while fighting for Ansar Allah, the rebel group in northern Yemen commonly referred to as the Houthis.

Although the release had been planned for several weeks, al-Maliki indicated that it had been sped up to occur in conjunction with the declaration of a two-month ceasefire in Yemen—the first ceasefire of its kind since the coalition’s intervention in early 2015. Al-Maliki suggested that the release would help to “prepare the atmosphere for dialogue between the Yemeni sides and facilitate closing the prisoners and detainees file,” according to the Saudi state-run Saudi Press Agency.

The United Nations (UN) welcomed the news, with UN special envoy for Yemen Hans Grundberg praising each of the sides for their commitment to the ceasefire on Twitter.

The released prisoners are part of a larger swap under discussion between Saudi and Houthi diplomats. Under a proposed arrangement organized by the UN, around 1,400 Houthi prisoners would be exchanged for 823 prisoners of the Saudi-led coalition—mostly consisting of local Yemeni forces but also including sixteen Saudi nationals and three Sudanese fighters. The last such exchange took place in 2020 and involved the exchange of around 1,000 prisoners between the two sides.

The war in Yemen is regarded today as the world’s deadliest conflict; since 2014, the country’s economy has been left in ruin, tens of thousands of Yemenis have been killed, and famine and cholera outbreaks have severely impacted the remaining civilian population. When the Saudi-led intervention began in 2015, Saudi officials vowed that it would take mere weeks to defeat the Houthi movement. Eight years on, however, the Houthis have expanded their holdings in Yemen and launched a series of missile attacks into Saudi Arabia and the United Arab Emirates, another member of the coalition.

As part of the truce, Saudi Arabia also vowed to allow the importation of fuel into Hodeidah, the besieged port city in central Yemen, and permit a handful of civilian flights into Sana’a, Yemen’s capital, which has been occupied by the Houthis since early 2015. The flights have yet to take place, and Saudi Arabia has insisted that all passengers must carry Yemeni government-issued passports—a handicap for the rebel group.