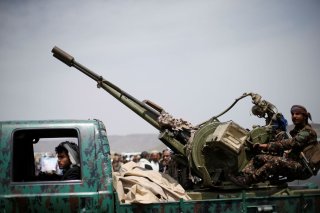 The Gulf Cooperation Council (GCC), the bloc of six Arab monarchies in the Persian Gulf, opened the first day of its summit aimed at brokering a ceasefire in Yemen on Tuesday, albeit with one major party absent: the Houthi rebels, which control the northern half of the country.

Representatives from the six GCC states—Saudi Arabia, the United Arab Emirates, Kuwait, Bahrain, Qatar, and Oman—attended the summit, as did representatives of the internationally-recognized Yemeni government of Abdrabbuh Mansour Hadi. GCC secretary general Nayef al-Hajraf opened the meeting on Monday with a discussion with the British ambassador to Yemen and several Hadi-affiliated officials.

The Houthis announced last week that they would boycott the summit, as it is being held in Riyadh, the capital of Saudi Arabia. Saudi Arabia has led the international coalition against the Houthis since 2015, when it launched “Operation Decisive Storm” and entered the conflict. That intervention was intended to drive the Houthis from the capital region in six weeks; it is now entering its eighth year, and the Houthis are advancing on all fronts, consolidating their position in the north and attacking the oil-rich Marib region in north-central Yemen.

The Houthis also boycotted the meeting in protest of the Saudi blockade of the Houthi-controlled port of Hodeidah and the country’s main airport in Sana’a. The Houthis’ leader, Abdul-Malik al-Houthi, proclaimed on the group’s Al Masirah television channel that it would “spare no effort” to eliminate or evade the blockades in place.

International organizations, including the United Nations and the Arab League, have pushed for a ceasefire in Yemen to mark the Muslim holy month of Ramadan, which begins on April 2. The Saudi government indicated late on Tuesday that it would suspend military operations in Yemen during Ramadan, although a Houthi spokesman later said that the group would not reciprocate.

On Saturday, the Houthis launched a high-profile drone attack against an oil storage facility in Jeddah, the second-largest city in Saudi Arabia, the day before a high-profile Formula One race was scheduled to take place. Although no Saudis were injured, the destruction from the attack was filmed and circulated widely on social media. Some observers speculated that the strike was intended to disrupt the race, which ultimately took place the following day without incident.

In retaliation for the attack, Saudi-led forces launched airstrikes on Sana’a and Hodeidah, resulting in at least eight Yemeni casualties. Following the attacks, the Houthis unilaterally announced a three-day truce, which has now expired.