How to Improve the Army's Armed Robotic Vehicles? Ask the Soldiers. 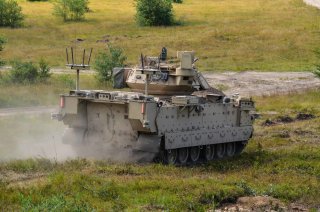 The Army is fast-tracking Robotic Combat Vehicles (RCVs) to face enemy fire. When directed by soldiers, the vehicles will also conduct forward surveillance, carry ammunition, and even destroy tanks as part of the Army's fast-moving modernization strategy.

The U.S. Army plans to “field” military robots in 2022 with units and put them in the hands of soldiers to assess their effectiveness, refine requirements and technologies and prepare them for possible warfare operations.

Prototypes of the Army’s Robotic Combat Vehicle Program-Medium (RCV-M) will be sent forward to units for in-depth, hands-on soldier assessments called “touchpoints,” service officials told the National Interest.  The concept behind soldier touchpoints is clear: experienced soldiers themselves are best positioned to know how best to use them and discern what works and does not work with the platform.

The program has now been underway for several years. The Army awarded developmental deals to Textron, General Dynamics Land Systems, and QinetiQ to build and test initial prototypes. The goal is to test the various offerings in an operational setting that replicates anticipated combat circumstances. This will help weapons developers make technological adjustments, refine requirements and concepts of operation and move the platforms closer to operational service and combat at war. The intent, one Army official told me, is to essentially engineer the robotic vehicles around and for soldiers.

“Soldier-centered design brings soldiers into the development process in regular and meaningful ways to provide valuable input to industry representatives, testers, researchers, and acquisition experts on the capabilities they will need to fight and win,” Kelley said. “Soldier touchpoints facilitate more rapid iteration of prototypes, help define and drive requirements and ensure the Army is meeting soldiers’ tactical and operational needs.”

Army plans for the vehicle are ambitious but realistic as they incorporate the use of lasers, tank-destroying missiles, thirty-millimeter cannons, and the ability to network with other air and ground drones and combat platforms. Some of the prototyping for the RCV-M will include the use of Javelin anti-tank missiles and the XM 813 Bushmaster chain gun, a July 2021 Congressional Research Service report on the RCV program explains.

The exact locations of where these robotics will be fielded have yet to be announced. However given the current threat environment and the Army’s push into transformational modernization, they are expected to arrive as soon as next year.

“The Army is delivering results that have reduced a seven-year requirements generation process to 18 months or less, placing systems in the hands of our Soldiers sooner,” Kelley said.