How Many Fighter Jets are Flying Across the Globe? 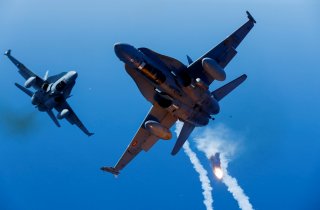 The report initially focuses on the aftermath of the U.S. withdrawal from Afghanistan. The Afghan Air Force and Special Mission Wing no longer exist as a result of the Taliban’s seizure of power in that country; meanwhile, experts are still trying to provide a full accounting of all the military aircraft lost in the midst of the chaotic exit.

FlightGlobal recorded a total of 53,271 currently active aircraft, a net reduction of 292 or .6 percent from last year’s directory. The United States continues to operate the world’s largest military fleet of 13,246 aircraft, comprising 25 percent of the global share. Russia took second place with its fleet of 4,173 or 8 percent, with the People’s Republic of China not far behind at 3,285 or 6 percent. The directory provides a detailed breakdown of quantities by aircraft type, including combat aircraft, special mission planes, combat helicopters, tankers, transport planes, and training craft. The United States comprises 19 percent of the global share of combat aircraft. China has notched second place at 11 percent—a reflection of the People’s Liberation Army’s aggressive modernization and procurement programs—followed by Russia at 9 percent. “Despite its concern over the growing capability of so-called great power rivals Beijing and Moscow, Washington’s air power dominance remains apparent,” the directory concludes. “Its armed forces top all six of our directory’s main aircraft usage categories, and their combined fleet strength of 13,246, or 25% of the global total, is greater than those of the next five-ranked nations combined: Russia, China, South Korea, India and Japan.”

At 2,248 active models, the F-16 Fighting Falcon is by far the world’s most numerous fighter jet. This metric includes all of the jet’s many variants, from the F-16A initial production model to the newer and more advanced F-16E/F revision that is fielded in large numbers by the United Arab Emirates. The Sukhoi Su-27/30 multirole fighter has earned second place at 7 percent, in large part due to the aircraft’s strong representation not only within Russia but across the broader former Soviet sphere, China, Africa, and parts of South Asia. Lockheed Martin’s F-35 Lightning II broke into the Top 10 category for the first time, a testament to the fifth-generation stealth fighter’s rapid domestic proliferation and continued success in global export markets.

The 2022 edition of FlightGlobal’s directory did not register any drastic net shifts in regional ai force inventories, noting only a 2 percent increase in the Middle East and 2 percent decreases in Europe and the Asia-Pacific region.