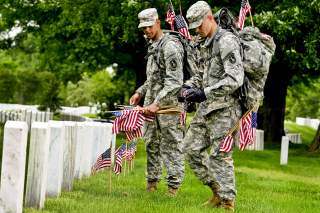 The history you need to know this holiday.

For many, Memorial Day is a time of barbeques, three days of rest and a pretty decent time to buy a new vehicle. Some people take time to thank veterans for their sacrifices.

However, if you’re thanking a veteran, you should only be thanking those interred in a graveyard.

A holiday with a rather disputed history, Memorial Day is believed to have begun in the aftermath of the American Civil War and was originally intended to be a time when people went to decorate and clean up the graves of American dead, be they Union or Confederate troops.

While such events went on for some time and were predominantly confined to Southern states, the holiday did not fall on a certain day until May 5, 1858, When General John A. Logan demanded that “Decoration Day” be observed annually and nationwide.

“The 30th day of May 1868, is designated for the purpose of strewing with flowers or otherwise decorating the graves of comrades who died in defense of their country during the late rebellion, and whose bodies now lie in almost every city, village, and hamlet church-yard in the land,” Logan wrote in a general order.

In response, Northern states began picking up the slack, with May 30 as a set day due to it being an optimal time for flowers to bloom in the North.

Interestingly enough, the holiday would eventually fall on a certain Monday of the month in order to allow for a three-day weekend, and such changes would not take place until more than a century later.

Some veteran advocates, including the Veterans of Foreign Wars, have asked that the holiday be re-assigned to its original date, with the VFW going so far as to say the three-day weekend aspect of the holiday cheapens its significance.

“Changing the date merely to create three-day weekends has undermined the very meaning of the day,” the organization stated in 2002. No doubt, this has contributed a lot to the general public’s nonchalant observance of Memorial Day.”

While Memorial Day has evolved to be more of a time for relaxation, commercialism and the unofficial beginning of summer, the true reason still stands, whether we choose to see it or not: a time to remember those who paid the ultimate sacrifice for the Republic.