How the Pentagon Is Preparing for War in Europe and Asia 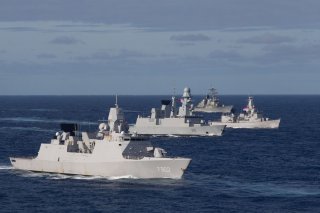 In comments provided during a press conference, Pentagon press secretary Air Force Brig. Gen. Pat Ryder explained how the United States is preparing to counter Russia’s aggression in Ukraine and prepare for anticipated aggression in Asia against Taiwan.

During the press conference, Brigadier General Ryder explained that “the USS Gerald R. Ford Carrier Strike Group is participating in Exercise Silent Wolverine in the Eastern Atlantic Ocean along with six NATO ally nations in support of multi-domain carrier training and to enhance integrated NATO interoperability and deterrence.”

With the flames of war still alight in Ukraine, America’s allies in Europe are understandably jittery about that conflict. Russian president Vladimir Putin has made several speeches in which he rattled Russia’s nuclear saber and threatened Ukraine with nuclear retaliation in response to Russia’s significant setbacks on the battlefield.

“Exercise participants include the United States, Canada, Denmark, Germany, France, the Netherlands, and Spain,” the general explained. He added that “Silent Wolverine demonstrates the U.S. commitment to supporting regional stability and security through seamless interchangeability amongst participating NATO allies. The exercise will conclude on November 14th.”

Though the war in Ukraine is unlikely to expand across the European continent, it is nonetheless the most significant geopolitical development in Europe in eighty years.

It is also proof-positive that the rules-based international order, built in the wake of World War II, has implications for security in Asia.

Brigadier General Ryder explained that “opening ceremonies for Exercise Malabar 2022 commenced today, as well, and will be followed by scheduled at-sea exercises involving naval ships, aircraft, and personnel from Australia, India, Japan, and the United States in the Philippines Sea, off the coast of Japan.”

Malabar 2022 is a multi-domain “field training exercise” that involves the four members of the Quad, a loose cooperation between the United States, Japan, India, and Australia. The exercise aims to “enhance interoperability between participating maritime forces, strengthen critical partnerships and further demonstrate DOD presence in the Indo-Pacific region.”

“Finally, the Department of Defense continues to consult closely with allies and partners on Ukraine's security assistance needs, in support of their fight to defend their country. As you're aware, we announced additional security assistance for Ukraine on Friday under the Ukraine Security Assistance Initiative worth approximately $400 million.”