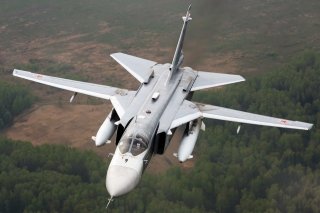 Here's What You Need To Remember: Russia committed strategic bombers into combat over Syria both for political signaling and testing purposes as well as to surge volumes of firepower against static targets it could not ordinarily achieve, particularly in eastern Syria.

On October 31, 2015, Metrojet Flight 9268 crashed in the Sinai, killing all 224 crew and passengers aboard the Russian airliner. The Islamic State claimed responsibility for the attack.

The Kremlin needed to strike back in dramatic fashion—and what better way to make a statement than to dispatch squadrons of huge strategic bombers?

At 5 AM in the morning on November 17, 2015, turbofan engines flared to life and the contra-rotating propellers of turboprops thrummed into motion as all three types of Russia’s Cold War-era heavy bombers sprang into action.

This article draws from two histories of the Russian Aerospace Force’s (VKS) Syrian expedition—Moscow’s Game of Poker by Tom Cooper and a “The Russian Air Campaign in Syria” by Anton Lavrov—to review how Russia employed strategic bombers over Syria from 2015-2017 in terms of methods, weapons, and aircraft; and the outcomes these achieved. Two earlier articles in this series look at Russian attack aviation (including Su-24 and Su-34 bombers) and aircraft losses over Syria.

The Bear and the Blackjack Go to War

As the Russian Aerospace Forces (VKS) already had several dozen tactical bombers and fighters based in western Syria, it was widely assumed that deploying big bombers on long-distance raids was purely for symbolic and combat testing purposes. But in fact, VKS tactical aviation elements in Syria could not quite surge the desired level of firepower for the retaliation strike, particularly against targets in eastern Syria.

Between November 17 and 20, Russian strategic bombers, and Su-34 bombers based in Krymsk, flew a total of 522 sorties from bases in Russia, often escorted by Su-30 and Su-35 fighters.

The Tu-95 and Tu-160 bombers, both flying from Engel airbase near Saratov, Russia were used exclusively as missile carriers. Both the planes and the missiles had never been used in combat before.

The Tu-160, which entered Soviet service in 1987, is a huge supersonic bomber boasting the largest engines ever on a combat aircraft—making it both bigger and faster than the U.S. B-1 Lancer. The Blackjack was designed to fly across the globe and launch nuclear-tipped cruise missiles from well beyond the range of enemy air defenses. Recently, Moscow has spent considerable sums refurbishing the sophisticated bombers into flyable condition, and dispatched them on flights to Venezuela as a calculated political statement.

Russia deployed five Tu-160 for the initial November 17 strike, and these flew over the Mediterranean Sea in a 4,000-mile roundtrip and launched a total of sixteen Kh-101 stealth cruise missiles from 500 miles away. 32 more Kh-101s followed in subsequent sorties.

These 7.45-meter-long subsonic missiles are rumored to have a radar-cross section of only .01 meters squared, and use a combination of inertial and terrain-mapping navigation, as well as optional TV terminal guidance.

Also involved were Tu-95 Bear bombers that seemingly lumbered out of an alternate history version of World War II with their four turboprop engines and defensive tail-guns. But like its contemporary, the 1950s-era American B-52—the Tu-95 remains useful because it can heft heavy missile loads over long distances and launch them from beyond the range of air defenses.

As the rebels in Syria had no serious air defenses, the cruise missiles’ range and stealth capabilities were of little benefit—but there’s certainly merit in testing whether fancy weapons actually land on target.

According to Cooper, a substantial percentage failed outright, or hit the wrong target. Two of the Kh-555 missiles failed shortly after launch and four went so off course they landed in the wrong country (Iran).

Many missiles struck non-ISIS targets in Syria with unimpressive results:

“Out of six missiles that approach the area of Kansafra, in western Aleppo, four failed shortly before reaching the (presumed) targets, one disappeared without a trace, and one demolished the local school (fortunately, this was empty.)…In Idlib, one missile is known to have demolished a local conserve factory, while another detonated right above one of the major streets, causing dozens of civilian casualties. At least two Russian cruise missiles reportedly hit friendly positions: one fell within ammunition factories…in IRGC controlled as-Safira, while another hit a local Syrian Arab Army HQ in western Aleppo, reportedly causing 36 casualties.”

Lavrov notes that subsonic, non-retargetable cruise missiles were ill-suited for targeting ISIS’ mobile forces and that videos released by the Russian Ministry of Defense show that misidentification of targets may have been an issue: an “ISIS oil refinery” actually turned out to be a water treatment plant providing water to both anti- and pro-regime forces in Aleppo.

In another video, Tu-22M bombers plastered a “militant tent camp” with bombs. “In fact, it was a granary, with stacks of grain sacks covered with sailcloth,” writes Lavrov.

A year later in November 2016, both Tu-95s and Tu-160s were back in action, launching Kh-101 missiles at targets in Aleppo as you can see in this video. Tu-95s flew one more 4,350-mile round trip mission in September 2017 aided by refueling from an Il-78 tankers)—carrying each four Kh-101s for attacks on Deir-es-Zor and Raqqa.

According to Cooper, later missile strikes were more impactful due to more accurate identification of targets by a “well organized network of ground observers.” This combined with the rebel’s lack of early-warning radars to alert them of incoming missiles.

The Tu-22M Backfire is a medium-range swing-wing supersonic bomber that entered Soviet service in the 1970s and saw some combat use over Afghanistan, Chechnya and Georgia. Backfire bombers based in Mozdok Airbase in North Ossetia saw much more extensive action over Syria than the Tu-95 and Tu-160, using the most old-school bombing method imaginable: dropping sticks of unguided “dumb” bombs from high altitude.

Lavrov comments: “The extremely active use of long-range Tu-22M3 bombers was quite a surprise. These bombers cannot be refueled in the air, which limits their range. Also, they do not carry guided weapons.” But that also meant Backfire strikes were much cheaper.

Flying across the Caspian Sea and over Iran and Iraq, 12-14 Backfire bombers surged up to two sorties per day during the November 2015 retaliatory campaign, targeting Deir-es-Zor and the ISIS capital of Raqqa. Each aircraft typically carried twelve 1,102-pound bombs, or smaller 551-pound types.

As with Russian tactical bombers, Tu-22M3s were gradually being outfitted with SVP-24-22 “Hephaestus” navigation/attack system which is programmed with specific GLONASS satellite navigation coordinates, and adjusts for wind, humidity and so forth to automatically time-release unguided bombs onto a designated target.

Nonetheless, accuracy was initially poor due to limitations of the GLONASS satellites (Russia’s GPS alternative) until stations were installed in Syria to improve accuracy. To improve accuracy, Backfire pilots also swept the swing-wings forward during bombing runs to allow for lower fight speeds.

According to Lavrov, Tu-22M3s flying out of Mozdok tended to reappear over the skies of Syria wherever the VKS sought to project additional firepower starting with supporting a counter-offensive against ISIS in the Palmyra sector in the summer of 2106. On July 11, two Tu-22M3s cluster-bombed a camp of 50,000 internally displaced refugees (IDPs) near the border with Jordan.

Four more Tu-22 raids in August totaling twenty sorties targeted ISIS in Deir-es-Zor. The last raid, on August 16, however, flew from Nojeh Airbase in Hamedan, Iran. These had arrived the day prior along with six Su-34s, intended to provide Iranian Revolutionary Guard Corps forces in eastern Syria with better air support.

However, Russian grandstanding over the arrangement backfired by drawing scrutiny from Iran’s parliament. As Article 146 of Iran’s constitution categorically forbids the basing of foreign troops on Iranian soil, the Russian bombers were disinvited a week after arriving.

When ISIS captured Palmyra a second time, Backfires again sprang into action January 21-25 although Cooper writes these raids had “no effect” on ISIS operations. Later in October and November 2017, Tu-22M3s extensively bombarded targets in the al-Bukamal area, often coinciding with strikes by submarine-launched Kalibr cruise missiles. The use of huge 6,600-pound FAB-3000-M54 bombs is also rumored.

Russia committed strategic bombers into combat over Syria both for political signaling and testing purposes as well as to surge volumes of firepower against static targets it could not ordinarily achieve, particularly in eastern Syria.

Both standoff missile strikes and computer-assisted unguided bombing initially performed underwhelmingly due to technical flaws and inadequate intel, but improved in later years due to better targeting methods and technical upgrades.

However, experts recognize level-bombing tactics would not be viable against an enemy with decent air defenses, and are promoting upgrading to the Tu-22M3M standard for precision-guided land-attack capability. Moscow also plans to procure 50 new, improved Tu-160M2 bombers.