How the Space Force Is Planning to Use Commercial Satellites 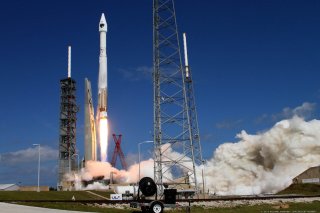 The United States Space Force would like to see more than stars in the night sky. The sixth and newest branch of the U.S. military has been charged with considering how to best utilize small Low Earth Orbit (LEO) satellites for intelligence gathering purposes. This month, Secretary of the Air Force Frank Kendall directed the service to look broadly at military requirements for overhead surveillance and how commercial constellations of satellites could be used in such a role.

"We were asked that question by the secretary of the Air Force: how are we going to use commercial capabilities?" Joseph Rouge, Space Force deputy director of intelligence, surveillance and reconnaissance, said on February 15, SpaceNews.com first reported.

"And so we’re in the middle of an effort right now to understand first the needs, and the requirements," Rouge said during an ExecutiveBiz online event on Tuesday.

Last summer the Department of Defense announced that it was working with a "who's-who" of military contractors, commercial satellite operators, and technology companies to finally demonstrate the feasibility of a proliferated constellation of satellites in the LEO.

The concept of using hundreds of small satellites spread out across that orbit to perform communications, missile warning, and other military missions has been discussed for years, but has largely been seen as infeasible due to the program’s cost. In addition, the size, weight, and power constraints required to operate and maintain capabilities in LEO has been a hurdle that engineers have been unable to clear.

However, there have been rapid technology advancements in the commercial sector and what was once little more than a pipedream could become reality.

The U.S. Space Force, which is part of the Department of the Air Force, is currently responsible for providing space-based support services including satellite communications, GPS navigation, and weather data. Intelligence, surveillance, and reconnaissance (ISR) has now been added to the list.

The military currently gets much of its overhead imagery from government satellites and aerial drones, but a constellation of LEO commercial satellites could provide high-quality imagery from the same location multiple times a day. The use of commercial space services for military ISR could help ensure battlefield commanders are provided with more reliable and timely data.

"Tactical ISR is our first venture into this," Rouge said. "It is an interesting challenge. We are finding a lot of requirements."

"I think before you hand off the ball, let's make sure there won't be a fumble ­and the Space Force has a lot on its plate right now," Rep. Jim Cooper (D-TN), chair of the House Armed Services strategic forces subcommittee, which oversees the Space Force, said during a webinar sponsored by the National Security Space Association.

"So let’s not rush these decisions, and if it's being capably handled today, let's probably stick with that for the time being," added Cooper, who is also on the House Permanent Select Committee on Intelligence, which oversees the NRO. "Remember, we’re all on the same team here, whether you're playing half back or full back, like, give me a break. All that really matters here is whether the warfighter is well served, whether the Intel Community is well served."

Officials at the NRO don’t seem eager to have Space Force take the lead either, but suggested a future partnership could be in the works.

NRO “remains fully engaged and committed to meeting the tactical Intelligence, Surveillance and Reconnaissance (ISR) requirements of our military command and service partners. We have not divested this mission,” a spokesperson told BreakingDefense last year. "Our programs support and complement each other, and our strong relationship is essential to our nation's strategy to protect and defend capabilities in this key domain."